In Brazil, several of Jair Bolsonaro’s supporters who participated in the Brasilia attack were released by the police after interrogation. They remain determined to block the path of the new President Lula. 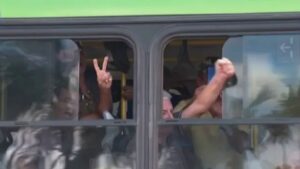 “Revolution”, “Victory is ours” shout the supporters of Jair Bolsonaro, the ex-president of Brazil, leaving the police station by bus on Wednesday January 11. Several hours earlier, they were questioned by the police for their involvement in the violence in Brasilia. They were released due to lack of evidence. Three days ago, these images went around the world. Thousands of Bolsonaro supporters who invade the places of power: the Congress, the presidential palace and the Supreme Court are ransacked.

Augustinho Ribeiro, 60, was present in Brasilia on Sunday. He admits having demonstrated but denies his participation in the violence. He has bad memories of his interrogation: “It looked like a Nazi camp, it’s humiliating. (…) When we arrived in front of the official buildings at the beginning of the afternoon, everything was already broken. We what we want to say is long live free Brazil, without communism. (…) We are going to continue the fight”. Augustinho had planned to join a camp of opponents in Sao Paulo, just dismantled by the police. Bolsonaro supporters had occupied it for several weeks. In Brasilia, security around official buildings has been reinforced. On social media, calls for action against power continue.