This access “with immediate effect” follows the peace agreement signed on November 2, recording a “cessation of hostilities” in the northern region of the country. 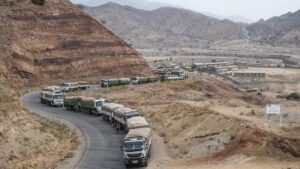 A World Food Program convoy en route to the village of Erebti (Ethiopia), June 9, 2022, two years after the start of the war in Tigray, in the north of the country. (EDUARDO SOTERAS / AFP)

The rebels and the Ethiopian federal authorities agreed on Saturday (November 12th) to the establishment of “humanitarian access to all those in need” in the Tigray region, which has been plagued by two years of war, they announced during a meeting. a press conference in Nairobi (Kenya). This agreement “with immediate effect” was signed by Marshal Berhanu Jula, Chief of Staff of the Ethiopian Armed Forces (ENDF), and General Tadesse Worede, Commander-in-Chief of the Tigray rebel forces, said for his part. former Nigerian President Olusegun Obasanjo, special envoy of the African Union.

This announcement follows discussions in the Kenyan capital Nairobi on the implementation of the peace agreement signed on November 2 in Pretoria (South Africa), notably through the disarmament of rebel forces, the restoration of federal authority in Tigray and the delivery of aid.

The conflict in Tigray began in November 2020 when Ethiopian Prime Minister Abyi Ahmed sent the federal army there to arrest leaders in the region who had challenged his authority for months and whom he accused of attacking military bases. federal on the spot.

Initially defeated, Tigray rebel forces regained control of most of the region during 2021, in a counter-offensive that spilled over into Amhara and Afar and saw them approach Addis Ababa. The rebels then retreated to Tigray, since cut off from the rest of the country, deprived of electricity and telecommunications networks.