The American president hopes to have “direct” exchanges with his Chinese counterpart and intends to find subjects of “cooperation on substantive issues”. 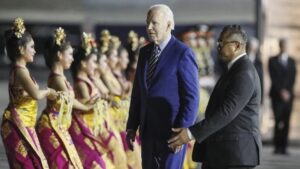 Joe Biden warned Sunday, November 13 that he intended to draw “red lines” in the strained relations between the United States and Beijing during his meeting with his Chinese counterpart Xi Jinping, a prelude to a G20 summit which promises to be marked by deep divisions.

The Democratic president touched down on the Indonesian island of Bali on Sunday evening aboard Air Force One for the meeting of leaders of the summits of major world economies on Tuesday and Wednesday, after attending the summit of the Association of South Asian Nations Southeast to Phnom Penh.

The US president said he approached Monday’s meeting “strengthened” after the Democratic Party’s unexpected success in the midterm elections. The two men have no shortage of subjects to debate, Washington and Beijing being at loggerheads on issues ranging from trade to human rights in the Chinese region of Xinjiang, passing by the status of Taiwan. “I know Xi Jinping, he knows me,” he added, saying they always had “frank discussions.” The pair have a relationship that dates back more than a decade to when Joe Biden was vice president, but on Monday they will meet face-to-face for the first time in their current roles.

“We have very few misunderstandings. We just have to determine what the red lines are,” said the American president. His national security adviser Jake Sullivan assured that Joe Biden hoped for “direct” exchanges but also to find subjects for “cooperation on substantive issues”. “The United States is ready for fierce competition with China but does not seek confrontation,” he told reporters aboard Air Force One.

According to the Maison Banche, Joe Biden will urge Beijing to use its influence to moderate North Korea, which has just carried out a record series of missile launches, seeming to be preparing to conduct the 7th nuclear test in its history.

Today News Post - November 22, 2022 0
The Blues face Australia on Tuesday for their entry into the 2022 World Cup, an opponent they know well, but who is nevertheless changing. The...