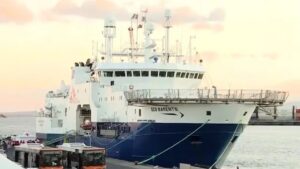 At the end of their tragic odyssey, the migrants are still on board one of the humanitarian boats, in Sicily, Italy. Sunday, November 6, the new far-right Italian government finally authorized the disembarkation of minors and sick people, but it intends to send the others back. For Doctors Without Borders (MSF), the situation is no longer tenable on board. “There is significant stress at the psychophysical level. There are infectious dermatological diseases too,” explains Riccardo Gatti, head of rescue at MSF.

In Russia, it was the 105th anniversary of the October Revolution. Russian Communists laid flowers at Lenin’s Mausoleum in Red Square, Moscow. Russians carrying portraits of Soviet leaders Lenin or Stalin marched along the Kremlin walls. “There were no oligarchs, no private property, nothing,” one man said. Communist Party leaders gave speeches during a government-sanctioned demonstration.