In Italy, humanitarian associations are facing the hardening of Giorgia Meloni’s policy of welcoming migrants. After several days of blocking, ships with hundreds of people rescued from shipwreck in the Mediterranean were finally allowed to disembark, but only women, children and vulnerable people. 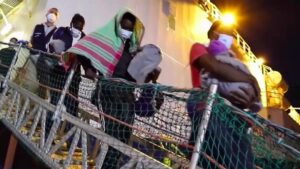 Monday, November 7, after five days at sea, the 90 passengers of the boat “Rise Above” feel joy and relief because they have just learned that they will be able to disembark in the port of Reggio Calabria (Italy). The conditions on board are difficult. There are sick babies. Moussa, a father, explains that his baby has chickenpox. “We haven’t been able to wash her for ten days. She doesn’t have enough to eat, she cries often,” he testifies.

Rescued in Italian waters, they disembarked this morning. But not all boats were so lucky. In Catania, Sicily (Italy), more than 250 migrants are still stuck in the port, the Ministry of the Interior having not given them permission to get off. Only families and sick people were able to disembark. This unprecedented selection decreed by the new far-right Italian government shocks the opposition. Italian associations came to demand the release of all the passengers. Left-wing deputies denounce an illegal decision.

Today News Post - September 24, 2022 0
Weed also has its advantages It can be quite a thorn in your side, all those weeds sprouting up between the tiles or on the...