The Russian skater learned of her positive trimetazidine test during the 2022 Beijing Olympics, disrupting the team event medal ceremony. 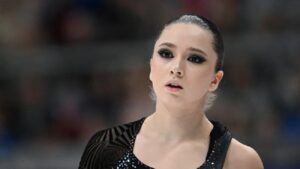 Kamila Valieva during a competition in Moscow, October 23, 2022. (AFP)

Almost a year later, the Valieva case is still not closed. The World Anti-Doping Agency (WADA) announced on Friday January 13 that Kamila Valieva was not sanctioned by the Russian anti-doping agency, after her positive test for trimetazidine. The athlete had been informed of the result of this test, which dated back to December 25, 2021, during the Beijing 2022 Olympic Games, when she was at the top of the short program.

WADA statement on Russian Anti-Doping Agency finding of ‘no fault or negligence’ in case of ROC figure skater | https://t.co/TREcpyz6ks

“The court found that, although the sportswoman committed an anti-doping rule violation, the violation was committed with ‘no fault or negligence'”, explains WADA, specifying that no sanction was imposed. to the 16-year-old skater, “except for the cancellation of her results on the date of the sample (December 25, 2021)”.

The Agency, which had requested a four-year suspension on November 14, said it was “concerned by the finding of no fault or negligence” and added that it would not hesitate “to exercise its right of appeal to the Court of Arbitration for Sport (CAS)”.

Team gold medalist at the Beijing Olympics in February 2022, Kamila Valieva found herself in turmoil after the announcement of a positive test by the Russian anti-doping agency (Rusada). The Court of Arbitration for Sport then authorized her to continue to participate in the Games despite her positive test, citing her young age.

First in the short program, the Russian skater finally collapsed during the free program, only finishing in fourth place. The International Olympic Committee has yet to award any medals for the team event, pending the results of the investigation.

Today News Post - January 6, 2023 0
While justice will soon render its judgment in the case between six NGOs and Total, the Cellule investigation and the International editorial staff of...