After 35 selections and long years in the shadow of Hugo Lloris, the goalkeeper announced on Saturday that he was ending his adventure with the Blues. 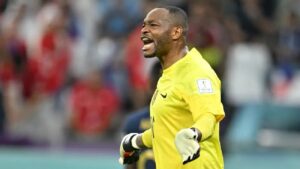 A new page is turning with the Blues. After the announcement at the beginning of the week of the international retirement of Hugo Lloris, it is another emblematic goalkeeper of the France team who is ending his adventure in the jersey of the France team. Steve Mandanda announced on Saturday January 14 that he would no longer wear the tricolor tunic.

“It’s a decision that was taken at the end of the World Cup, I had great moments with the France team. Today it’s time for me too, at 37, [to stop the France team]. There are young people arriving. This allows us to close the loop with Hugo Lloris. It is with great pride and emotion that I have experienced all this. Today, the The France team stops for me,” he explained at a press conference.

At 37, the Rennes goalkeeper will have left a mark on the Blues thanks to his 35 selections and his role as leader in the locker room. Since May 27, 2008 and his first cap against Ecuador (2-0), first chained the selections (11 between August 2008 and October 2009), before finding himself in the shadow of Hugo Lloris, permanently installed as number 1 in the hierarchy.

A defeat against Tunisia to finish

Steve Mandanda then occasionally participated in friendly matches against Costa Rica (May 2010), Ukraine (June 2011) where he was captain, Iceland (May 2012) and Uruguay (June 2013). At the end of 2014, he was able to string together a series – again friendly – against Portugal, Armenia, Sweden and Brazil.

The French goalkeeper also played in the 2018 World Cup qualifiers against Belarus (June 6, 2016). A World Cup in Russia in which he will participate, on the occasion of the third match of the group stage against Denmark (0-0). “In Russia, in 2018, it was huge! We had an extraordinary group. There were negative and positive moments, unforgettable emotions, I will always be proud and grateful,” he said.

Crowned world champion with the Blues, Steve Mandanda did not participate in the Euro which followed, but took part in the 2022 World Cup in Qatar. His last appearance in the French jersey will be the 1-0 defeat against Tunisia in the third match of the group stage, when France had already qualified for the knockout stages. “I felt privileged to participate in the World Cup, I was no longer called up too much, then I found playing time in Rennes. There was also Maignan’s injury. It allowed me to live this last great competition. We did something great, but it’s good to know how to stop when necessary”, detailed the now ex-keeper of the Blues.