While tensions between France and Germany have not yet fully subsided on Wednesday, October 26, what impact can they have on a European scale? Live from Brussels (Belgium), we find the journalist Julien Gasparutto. 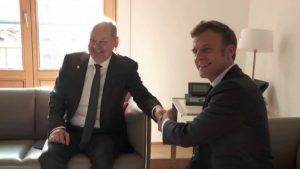 What could be the consequences of the disagreement between France and Germany? “It rubs off on all of Europe. When relations between France and Germany are not good, this blocks discussions”, states Julien Gasparutto, in duplex from Brussels (Belgium) on Wednesday 26 October. It seems complicated today for a diplomat that the two countries manage to reach a consensus on the subject of energy, for example.

These tensions also reinforce the divisions on the subjects which annoy within the 27 member countries. “Germany takes the countries of the North on board with it, France the countries of the South and in the end the tensions crystallize around Paris and Berlin”, analyzes the journalist. But in Brussels, the real subject seems to be Germany, whose economic model, based on dependence on Russian gas, has exploded since the start of the war in Ukraine. “Eastern countries criticize Berlin for not having listened to the warnings”, reports Julien Gasparutto. Olaf Scholz, whose austere attitude arouses criticism, is struggling to impose himself. And all this weakens the European Union.

Today News Post - September 26, 2022 0
Toothpaste on fingernails really works! Your fingernails are discolored by a lot of nail polish or you just want to touch them up a little?...