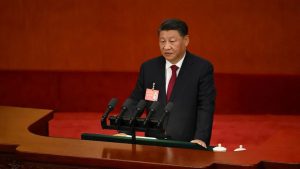 The communist leader notably maintains tense relations with the United States over Taiwan, and is eagerly awaited in the fight against global warming.

The 20th Congress of the Chinese Communist Party, which is currently being held in Beijing, should lead President Xi Jinping to a third term on Sunday, October 23. The leader, who is facing the growing anger of the population because of his repressive “zero covid” policy, will find on his desk other files as thorny as they are familiar.

1The status of Taiwan

The Chinese president has made reunification with Taiwan a priority for several years, multiplying threats to use force if necessary. The last dates from October 16, during his speech at the opening of the Communist Party Congress. Xi Jinping said China is working “with the greatest sincerity and utmost efforts for the peaceful reunification [of Taiwan]” but will “never renounce the use of force” and reserve “the possibility of taking all necessary measures”.

The situation is souring China’s relationship with the United States. US President Joe Biden assured in September that Washington would defend Taiwan “if an attack were to occur”. Beijing had considered this position as a “serious violation of the important commitment of the United States not to support the independence of Taiwan”.

While Xi Jinping did not explicitly mention Washington in his recent speech, he did refer to it by declaring his opposition to “any form of hegemonism (…), interference in the internal affairs of other country”. The situation could become tense in the weeks to come, especially if Beijing decides to invade the island militarily, as the Taiwanese increasingly fear.

2Waves of Covid-19… and protest

Xi Jinping has persisted since the start of the Covid-19 pandemic in applying a policy of zero tolerance, orchestrated with the help of massive citizen surveillance (travel registration) and coercive measures (imposed PCR tests, strict isolation , heavy penalties in the event of non-compliance with confinement, etc.). The Chinese leader praised it at the party congress, saying he had “protected the safety and health of the people to the highest degree and (…) achieved significant positive results by coordinating the prevention and control of the epidemic. with economic and social development.

However, in addition to a blow to the country’s economic growth, this authoritarian strategy has given rise to strong discontent. In April, while the authorities were still struggling to stem a wave of the Omicron variant with repeated confinements, the protest mounted, first on social networks, then in the streets. On the eve of the Communist Party Congress, a banner hung on a bridge in Beijing even called on citizens to go on strike and drive out “the traitor dictator Xi Jinping”.

3 The fight against global warming

The country is the biggest polluter in the world and the first emitter of greenhouse gases. It faces major problems of drought and pollution on its soil, which have an impact on public health. At the same time, China is also a world champion in renewable energies. In about ten years, it has become the world’s leading investor in wind and solar energy. In March 2021, Beijing promised to increase the share of renewable energy used in the country to 25% by 2025 and aims for carbon neutrality by 2060.

Despite the suspension of his cooperation with the United States in the fight against global warming on August 1, Xi Jinping reaffirmed his ecological objectives, at the opening of the congress of the Chinese Communist Party. “We will actively participate in global governance on climate change,” he said.

However, the country remains very dependent on fossil fuels and is not about to get rid of them. Beijing announced in April 2022 that Chinese coal production would increase by an additional 300 million tonnes for the current year. A contradiction pointed out by many international observers.

4 A delicate position between Russia and Ukraine

China being a historical ally of Russia and one of the main trading partners of the West, Xi Jinping has long maintained an ambiguous posture vis-à-vis the annexation of part of Ukraine by Vladimir’s troops. Cheese fries. On March 7, the Chinese leader assured that the friendship between Beijing and Moscow was “solid as a rock” and he has long held an ambivalent posture: no direct support for Russia, but no condemnation of the invasion either. .

On September 21, Beijing came out of its reserve by calling on Russia for a ceasefire. A few days later, at the UN General Assembly, Chinese Foreign Minister Wang Yi called on “all parties concerned to prevent the crisis from overflowing”. “The priority is to facilitate peace negotiations”, he insisted, calling for “fair and pragmatic” discussions for a “peaceful resolution of the crisis”. The Chinese minister also met in New York with his Ukrainian counterpart Dmytro Kouleba, assuring him that Beijing called for respecting “the territorial integrity of all countries”.

5 Persecution of the Uyghurs

The Uyghurs, a Muslim minority in China, suffer abuses in the province of Xinjiang, in the northwest of the country. On May 24, a media consortium published damning documents for the Chinese power, a few months before the publication of a UN report denouncing, among the atrocities committed, arbitrary detentions, acts of torture, forced abortions. The organization which denounces possible “crimes against humanity” has requested “urgent” attention from the international community on this issue.

China could be called upon to explain itself and put an end to these abuses, which place it under the critical fire of many non-governmental organizations working for human rights.

Today News Post - November 11, 2022 0
For centuries, the Romanovs were one of the most powerful dynasties in the world…and yet they will forever be remembered for how it all...