As representatives of 88 countries gathered in Djerba, Tunisia, Emmanuel Macron took the opportunity to talk about the war in Ukraine, but also about conflicts in the eastern Democratic Republic of Congo and in the Caucasus. 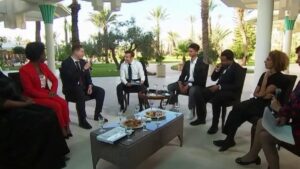 For two days, the time of the Francophonie summit, Djerba (Tunisia) is the capital of the French-speaking world and welcomes representatives from 88 countries, including Emmanuel Macron. But what are the issues? “A reunion after four years of absence. The 18th Francophonie summit has been postponed twice. The first for health issues related to Covid-19. The second due to political and social tensions in Tunisia. First planned in Tunis, the summit has been relocated to Djerba where nearly 30 heads of state and government are present. The theme of this summit is digital”, explains Karine Henry, live from Djerba.

The next summit will take place in France

“There was a plenary session open to the press, meetings behind closed doors and, as often in this kind of event, bilateral talks. Emmanuel Macron wanted to discuss the war in Ukraine and also wanted to discuss the resumption of hostilities in the east of the Democratic Republic of Congo and in the Caucasus, between Armenia and Azerbaijan. Emmanuel Macron has just announced that France will organize the next Francophonie summit in two years. It will take place in Villers- Cotterets, a very symbolic city because it is there that in 1539, an ordinance established French as the official language of the kingdom of France”, she concludes.

Today News Post - November 8, 2022 0
The occupation authorities evoke both the evacuation of troops and the desire to defend the city. Ukrainian forces expect fierce street fighting, without giving...