Thirty stolen items were found in Berlin, while the trial of several suspects accused of the burglary is taking place. 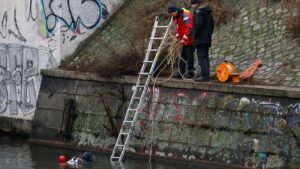 German police officers carry out an operation in a canal in Berlin (Germany), on December 25, 2022, to find pieces stolen from a museum in Dresden. (AFP)

New twist, three years after the spectacular burglary of the Green Vault museum in Dresden. German police divers were mobilized in Berlin on Sunday, December 25, to find some of the jewelry stolen in 2019, according to the Dresden police department, quoted by the German daily Der Spiegel. A “considerable” number of treasures has already been found on December 17.

“About 150 meters of the canal must be searched”, specified the direction of the police of Dresden. “In view of the ongoing investigation, no more can be said at this time. This currently includes the results of the search measures,” the police told Spiegel.

A break-in that marked the spirits

In all, 31 complete pieces or fragments were found on the night of December 17 to 18 in Berlin by investigators and police officers from Dresden, then reported AFP. Among them were the “Breast Star of the Polish Order of the White Eagle”, set with diamonds, and the “Hat Jewel”, counting nearly 300 diamonds. Other pieces were missing, including a brooch that belonged to Queen Amalie Auguste of Saxony.

This discovery took place during the trial which opened in January of six suspects, including two minors at the time of the facts, tried for this theft. At the end of 2019, the burglary in the Green Vault museum (the “Green Vault”), had struck the spirits by its sophistication and the amount of the loot. In total, the stolen treasures represented a total insured value of at least 113.8 million euros.

Today News Post - December 25, 2022 0
An investigation has been opened to determine the causes of the accident. The driver of the bus, one of the two survivors, tested negative...

Dakar 2023: Sébastien Loeb takes a fifth victory on the 11th stage in a car, and is closing in on second place overall