The countries of the Gulf of Guinea are active in the face of the multiplication of jihadist attacks. 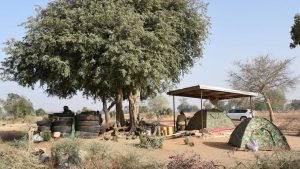 Terrorist attacks are on the rise in Benin, a state that is seeking to strengthen its partnerships to deal with them.The Accra Initiative – which the country is at the origin with Burkina Faso, Côte d’Ivoire, Ghana and Togo – is “the ideal framework for the fight against terrorism, especially in southern Burkina” , said Beninese President Patrice Talon on July 27, 2022, when he received his French counterpart Emmanuel Macron. A few days earlier, a report by the United Nations Office for West Africa and the Sahel noted that “in the face of terrorist acts committed in coastal countries of the sub-region”, the latter had “intensified their collaboration in under the Accra Initiative”.

“An answer” to the terrorist threat

This initiative, which can be considered as the counterpart of the G5 Sahel (bringing together Niger, Burkina Faso, Chad, Mauritania and until recently Mali) for the countries of the Gulf of Guinea. Its raison d’être: “to promote the exchange of information as well as cooperation in the conduct of cross-border military operations”, indicated an Ivorian official at the UN. The Accra Initiative was born “in response to growing insecurity in the sub-region”, reminds franceinfo Africa Seidik Abba, author of Mali-Sahel: our own Afghanization? (Impact Editions).

“Except that since its launch in 2017, there hasn’t really been any concrete action”. Which is all the more regrettable, according to the specialist, since Burkina “is a member of both the G5 Sahel and the Accra Initiative. It is a strategic country for the jihadists because it shares four borders with the countries of the Gulf of Guinea: Benin, Ivory Coast, Ghana and Togo”, he adds.

Seidik Abba also regrets that the countries at the origin of the Accra Initiative “have not developed anything between themselves and have not drawn closer to the countries of the Sahel either”. “They should have been alerted to the fact that the kidnapping of two French people in Pendjari Park, Benin in May 2019, was perpetrated by terrorists who came from Burkina Faso where they brought their hostages back. This is in this country that the French intervention took place to free them. It is clearly a lack of anticipation”.

The idea was however “good” because the Accra Initiative “was thought of as a kind of cordon sanitaire which would serve to block the jihadists in the Sahel”. “Unfortunately, deplores the journalist, the Member States have not developed a real strategy to thwart the descent of these terrorists. And the threat today goes far beyond the Sahel”. “There is little doubt that regional cooperation is needed to defeat terrorism”, insists Seidik Abba.

While the Accra Initiative seems to be reactivating, the essayist stresses that it would be necessary “to begin by restoring and intensifying, despite the withdrawal of Mali, this cooperation between the G5 Sahel and the Accra Initiative”. Especially since “Niger and Mali have been accepted as observer members so that they can share their experiences”. In addition, these coastal countries “must be able to learn lessons from the failure of the Sahel States’ response to security challenges”. The latter having bet on “all security” and concealed “the question of development”. On the operational level, “the right of pursuit” should be established within the Accra Initiative, a measure that works in the G5 Sahel. This right allows, for example, Niger to pursue over 50 km jihadists who have perpetrated attacks on its territory and who are retreating to Mali, without having to request prior authorization from Bamako.

The pooling of resources between the two organizations would also be welcome. “Especially since those in the Gulf of Guinea are more affluent than their Sahelian neighbours. Côte d’Ivoire and Ghana are the second and third largest economies in the Economic Community of West African States”. Moreover, “these countries have well-equipped armies” and Ghana has “real military expertise acquired from its participation in numerous UN peacekeeping operations”.