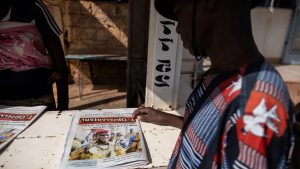 A man reads a newspaper on which appears on the front page a photo of Captain Ibrahim Traore, the leader of the military junta which rules Burkina Faso, in Ouagadougou, on October 3, 2022. (OLYMPIA DE MAISMONT / AFP)

Francis Laloupo is the author of Democratic Blues 1990-2020, published by Karthala editions. The journalist and researcher associated with the Institute of International and Strategic Relations (Iris) analyzes, among other things, “the crisis of democratic transitions in Africa”.Francis Laloupo: In any case, the issue of terrorism has made the democratic agenda secondary, particularly in the Sahel. The “new generation” coups are not based on an ideological paradigm, but essentially on the security issue. Except in Guinea, where the putsch was perpetrated against a leader who committed what Guineans considered a constitutional coup. These blows, which are described as salutary by the populations – we can clearly see the enthusiasm they arouse – are considered by them as a response to the inability of an elected president to fulfill the promises of his democratic election. .

Only, we note, in Mali, in Guinea or in Burkina Faso, that these blows settle durably in time. It is as if the military, who are considered today as the actors of democratic rectification, finally take the place of the civil oppositions, regularly elected, to set up regimes which could become powers in opposition to the democratic claim . We are witnessing a shift!

Why are the blows, which are increasing, particularly concentrated in West Africa, many of whose countries are former French colonies? Could there be a causal link?

West Africa was considered, between 1990 and 2010, as the most promising region in terms of democratic achievement. In contrast to Central Africa, which was considered to be the black hole of democracy. Incidentally, we must put the observation into perspective when we talk about the return of coups on the continent. We are not in a festival of putschs: there have been three coups d’etat in West Africa in about fifteen countries concerned. It should be added that they took place in the Sahelo-Saharan region and in the Gulf of Guinea. Of the three coups we are talking about, two are linked to the security issue, which is central to West Africa today. This means that the subject not only pushes back the democratic agenda, but that it could also lead to the establishment of new authoritarian regimes that I call “neo-dictatorships” – neither democracy nor autocracy – particularly in these countries. Regimes which could, in the long term, paralyze the democratic project as thought since the 1990s [a period when many African countries have turned to a multiparty system].

There is a specificity of French-speaking countries. If we make the connection between the security issue and coups d’etat, we realize that in a country like Nigeria, which has been confronted for several years with the terrorist scourge with Boko Haram, political stability is the strongest response country has opposed jihadist expansion. Nigerian democracy has made tremendous progress over the past twenty years. When we know that the project of jihadist terrorist groups is to destroy States as we conceive them and replace them with their software, it is clear that Nigeria provides the most effective response.

In addition to the security issue, these coups have another characteristic: the joy and support they arouse among the populations, especially young people…

This enthusiasm is symptomatic of the great despair of these populations, disappointed by civil regimes which have failed to keep their democratic, economic and social promises. Furthermore, there has been a missed opportunity over the past thirty years, that of transmission between generations. What has been transmitted from the memory of the conquest of democracy, which occurred in the early 1990s, to young people who are now between 20 and 30 years old and who applaud these blows? Was there a pedagogy of democracy? Has there been a strengthening of civic education? Has democratic anchoring been assumed as a historical project? This has been the case in certain countries such as Cape Verde, Ghana or Nigeria, and in other countries in southern Africa.

We are witnessing today with these coups d’etat the emergence of a kind of political chaos which is distinguished, among other things, by the rise of a specifically African populism mixed with a spirit of historical revenge which arouses new passions within the youth. The latter finds in these speeches, without any real political project, the opportunity to redo a revolution that is based more on fantasies than proven facts.

How to explain the emergence of this anti-French rhetoric in these politically unstable countries?

There are deep reasons why France is castigated in the streets of Bamako and Ouagadougou, or even elsewhere. This anti-French sentiment is the result of all these badly settled colonization accounts. But all this is of course instrumentalized. We must take into account the uninhibited information war engaged by Russia for several years, against what it calls the West. An anti-West war in which she wants to associate African partners. Added to this is an economic project perfectly executed by the Wagner group, which oscillates between security and the exploitation of natural and mining resources in certain African countries.

Vladimir Putin’s Russia agenda is very clear today. In comparison, the African agenda is much more vague. This is not an incantatory way of appealing to Russia just to fight the memory of French imperialism. Above all, Africans need to be able to clearly identify the benefits they derive from their partnerships, whatever they may be.

Why is Russian propaganda so effective in these countries with young people, who do not always have the appropriate civic education, but also with certain intellectuals?

Russia exploits all the weaknesses of its Western adversaries. Moscow also exploits what you mention, that is to say a fairly significant lack of education of the populations which makes them more permeable to a rather crude informational war. When we see the arguments that are poured out in the Central African Republic or in Mali by Wagner’s communication agents, we wonder how people can take this on their own, to the point of going to demonstrate. Where the matter becomes more complicated is when African actors, who are better equipped intellectually, take over from such a mechanism to serve suspect national political agendas which in no way serve the interests of the populations.

Today News Post - November 8, 2022 0
The occupation authorities evoke both the evacuation of troops and the desire to defend the city. Ukrainian forces expect fierce street fighting, without giving...