A BBC documentary puts the toll at at least 24 dead and 77 missing, while officially only 23 are reported dead. 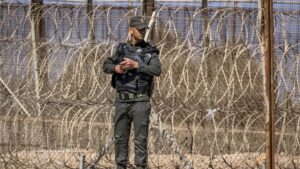 A member of the Moroccan security forces facing the barbed wire wall in the Spanish enclave of Melilla in Morocco, June 26, 2022. (FADEL SENNA / AFP)

Melilla, this Spanish enclave in Morocco, is the only land border between Africa and the European Union. Melilla and Ceuta, territories of a few square kilometers under Spanish control in northern Morocco, are little bits of Europe in Africa, which are the subject of intrusion attempts by migrants, sometimes massive and severely repressed. Published Wednesday, November 2, a documentary by the BBC, the British public broadcaster, looks back on the day of June 24, the deadliest in Melilla.

That day, at dawn, 2,000 migrants, mostly Sudanese, tried to cross the six-meter-high fences. They are beaten by the Moroccan police, pushed back by the Spanish police, some fall from the top of the barbed wire, there are jostling. Result: 23 dead, according to the Moroccan and Spanish authorities, officially because of crowd movements. But this BBC documentary contradicts those claims. He estimates the toll at at least 24 dead and 77 missing. Potentially, therefore, a hundred victims.

It is also the methods of the Moroccan border guards and their Spanish counterparts that are called into question. On the videos that have been recovered and authenticated, we see Moroccan police beating migrants on the ground. Some are unconscious, others visibly injured, no immediate care is brought to them. “Blood everywhere, naked people, wounded…” says a young Sudanese. Moroccan police also entered Spanish territory to dislodge several hundred people, according to the BBC. A highly contested process, which prevents migrants from applying for asylum.

“An investigation without evidence”

No reaction from Morocco for the moment. The Spanish Interior Ministry denounces an investigation without proof, and supports its police officers in the face of “a massive and violent intrusion.” If we zoom out, police cooperation in Ceuta and Melilla is a bit of a barometer of diplomatic relations between Spain and Morocco. Last year, in the midst of a quarrel, Madrid suspected Rabat of having encouraged 8,000 migrants to force entry, as an act of retaliation after diplomatic differences between the two countries. Over the past year, relations have improved, but is this at the cost of violence against migrants? In the meantime, the UN Human Rights Council is still calling for a transparent investigation into the tragedy of June 24th.