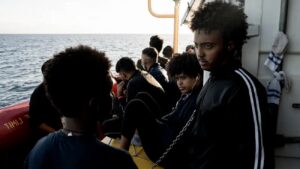 Migrants on the deck of the humanitarian ship Ocean Viking in the Gulf of Catania, in the Mediterranean, on November 6, 2022. (AFP)

About fifteen associations denounced, Monday, December 5, the government bill on immigration, “continuous deterioration of the rights of migrants”, on the eve of its presentation to the National Assembly on the occasion of a debate without a vote. The text, the main lines of which are already known, will be the 29th on asylum and immigration since 1980.

“An umpteenth bill (…) which always goes in the same direction, (…) a restriction of reception conditions and a continuous deterioration of the rights of migrants”, pointed out Fanélie Carrey-Conte, secretary General of Cimade, during a press conference bringing together some fifteen associations at the headquarters of Amnesty International France in Paris.

In question, in particular, the will of the government to impose an obligation to leave French territory (OQTF) as soon as the asylum application is rejected, without waiting for a possible appeal. A measure which generates “risks of illegal refoulement”, before all the remedies are exhausted, according to Jean-Claude Samouiller.

Another reason for concern: the extension of the use of a single judge to the National Court for the Right of Asylum (CNDA), which rules mostly collegially, combined with a territorialisation, on the network of administrative courts, of this body currently based in the Paris region and divided into geographically specialized chambers.

“The judge will have to be aware of all the persecutions in the world. We move from a situation of specialist to a situation of generalist, and it is [the judge] alone who will make his decision in the face of people who play their lives”, underlined Jean-Claude Samouiller.

Today News Post - November 15, 2022 0
Many people keep their phone by their head, bed or somewhere nearby all night. Is it safe? Scientists have analyzed the research of recent...

War in Ukraine: the Soledar salt mine, the other stake in the capture of the Ukrainian city for the Russians