The economic slowdown which resulted from the zero Covid policy in China was “a considerable blockage which weighed on the legitimacy of the party”, analyzes Valerie Niquet, specialist in Asia at the Foundation for Strategic Research. 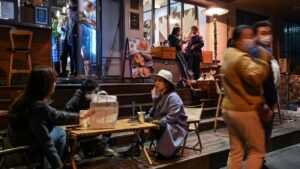 The relaxation on the zero Covid rules is palpable in Beijing, December 7, 2022. (AFP)

“It is a sign that Xi Jinping had to give in”, explained Wednesday December 7 Valerie Niquet, specialist in Asia at the Foundation for Strategic Research when Beijing will proceed with a general reduction in its zero Covid policy while for several days the Chinese had been expressing their anger at the restrictions. “What is very impressive is the absence of QR code controls,” she said. According to these new rules, “asymptomatic infected people and mild cases” will no longer be taken to a quarantine center. It’s a radical change that is “a gamble”, according to her. The slowdown in the Chinese economy also played into this decision, she explains. “It was really a considerable blockage which weighs on the legitimacy of the party”, she says.

“What is very impressive is the absence of controls for the red, orange or green QR codes that people had on their phones that prohibited entry anywhere.

This is a very important lift. The question will be to see how things will be applied in the provinces, in small towns, in the countryside where the healthcare system is very little present. If there is a significant upsurge in cases of people who are sick, who need to be hospitalized, what will the authorities do? The health commission indicates that local authorities must now know how to make rational decisions on a case-by-case basis. All the responsibility for what will happen will be placed on the account of the local authorities and some are totally helpless.

What about vaccination in China?

There are no more vaccinations at the moment, in any case. It will take months for the population to be truly vaccinated. There are no more messenger RNA vaccines and so it seems that the authorities are counting on a less dangerous Omicron with their fingers crossed that there are not too many victims and that outside the big cities, you can’t see it. It’s a bit of a gamble though. And it is also a sign that Xi Jinping had to give in.

Precisely, what pushed the Chinese president to give in?

There are many factors. There is the economy which is not doing well at all, which is not recovering, apart from exports. But above all, it affects people in their daily lives. A lot of people have a precarious status and if they can’t move freely in the country, go to work, they have nothing. There is no unemployment system. So social anger is also caused by that. The economy needs to pick up. And above all, this fluidity of the Chinese economy, which was its dynamism, must be able to resume. It was really a considerable blockage which weighs on the legitimacy of the party. And then we don’t know what’s going on at the top of the Communist Party. It is quite possible that in the face of the demonstrations which directly accused Xi Jinping by asking him to resign and that his colleagues told him that: “good, now that’s enough”, it will be necessary to take measures a little less rigid.

Will this be enough to calm the anger?

If travel resumes, there is no massive resumption of the pandemic, especially since there are not too many deaths or a little far away, it is less visible. Normally things should be better. If we take up the pseudo social contract in China, “the economy is fine, you get rich, you travel and you do pretty much what you want, but we don’t talk about politics”, I think it can start again like that. But that means that Xi Jinping will indeed have to put a lot of water in his wine.

Today News Post - January 14, 2023 0
The announcement was made on Saturday by the Iranian Judicial Authority's agency Mizan Online. The Iranian-British Alireza Akbari, during an interview in Tehran. ( KHABAR...