This central African country, the continent’s largest economy and most populous country, has been hit by historic floods that hardly anyone talks about. 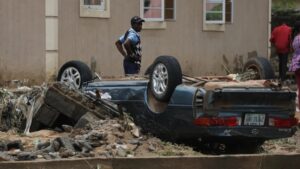 A man looks at the damage caused by the bad weather that hit Nigeria on September 13, 2021. (KOLA SULAIMON / AFP)

The images in Nigeria, as often with the floods, are impressive. Entire villages are found under water (only the roofs of the houses protrude here and there). Cars are swept away by the waves, trucks stuck on blocked roads, bridges, schools, hospitals half destroyed. The latest official reports show 600 dead, 1.4 million displaced, 200,000 houses uninhabitable.

This is twice as many deaths as during the last floods experienced by this country of 210 million inhabitants, it was ten years ago. Twenty-seven of the country’s 36 regions are affected. In particular the southern coastal states: Bayelsa State alone has one million displaced according to estimates today by the governor of the region. That’s half the population. The inhabitants travel by canoe, the only viable means of transport. Concern is growing, because of the risk of epidemics and also of famine, because hundreds of thousands of hectares of agricultural land are also under water. In addition, the rainy season is not over and can still last until mid-November.

There are several explanations for this situation. Nigeria, like many African countries, is on the front lines of global warming. Episodes of heavy rain are becoming more frequent. The fact is established, but the means are lacking to deal with it and the politicians are bickering. In recent days, everyone is passing the buck to Nigeria. The opposition criticizes President Buhari, who was slow to take stock of the tragedy. President Buhari eventually responded by castigating the local governors who, according to him, had not sufficiently developed the canals and the banks of the rivers in the face of the risk of flooding. The local governors point the finger at the neighboring country Cameroon because at this time of the year, it has a habit of releasing the water contained in a dam lake located on the border. Cameroon replies that Nigeria has been supposed to build its own dam for many years to control this phenomenon but constantly postpones the work in question.

A high risk of starvation

In the meantime, the result is there and it will not get better in the years to come, and it is fascinating to see that almost no one is talking about these floods in Nigeria. Rare are the international media to talk about it. The subject is invisible, relegated to the background, like many others, by the war in Ukraine even though the UN does not hide its concern. It ranks Nigeria among the six countries in the world most threatened by the risk of famine. Especially since the price of food products has increased by 26% in recent months. The price of rice in particular. And this is a consequence, in part, of the war in Ukraine.

Today News Post - November 19, 2022 0
As the snow begins to fall on the country, Kyiv has asked for "additional support" from the EU to deal with the energy crisis...