The energy crisis that the country is going through is likely to worsen after a record year: more than 200 days marked by power cuts. Years of corruption, sabotage and mismanagement have brought state-owned Eskom to the ground. 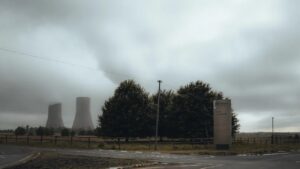 A power station of Eskom, the public electricity company, in Standerton, South Africa, on December 18, 2022. (AFP)

Should South Africans fear a candlelit 2023? It is indeed surely the right year to buy candles, generators, solar panels, or to resign oneself to great sobriety, since the first three months of 2023 will be difficult, warned the director of Eskom. South Africa has had electricity production problems for fifteen years, but 2022 was the worst year and it is expected to get worse. This week, for example, it is scheduled until 11:30 a.m. cut-off per day.

The situation is unbearable for individuals and becomes untenable for businesses. Even a multinational like KFC, the fast-food giant, has announced that it will temporarily close some of its restaurants. For other small businesses, such as bakers, it is unthinkable to run an oven with a diesel-powered generator… Also, it is necessary to adapt to the load shedding schedules which make it possible to protect the network from a collapse when demand exceeds production. The blackout, complete darkness, being the worst that could happen.

The public electricity company is ungovernable

The other reason to worry is that Eskom, the public electricity company, seems ungovernable because of the corruption that plagues the company. Some power plants are in the nets of organized crime, alerted the CEO of Eskom, who has just slammed the door. Andre de Ruyter even filed a complaint for attempted poisoning. After feeling unwell, he was rushed to a clinic where blood tests revealed an abnormally high level of cyanide. His position is now free, it is a “difficult” job, admitted the President of the Republic, Cyril Ramaphosa. Before adding: “I will applaud whoever holds this position…“

Today News Post - January 14, 2023 0
The city's mayor Vitali Klitschko reported explosions in the Dniprovskiy district, calling on residents to "stay in the shelters". Ukrainian soldiers near their vehicle equipped...