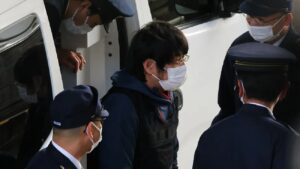 Japanese prosecutors on Friday (January 13th) charged the man suspected of the murder of former Prime Minister Shinzo Abe last July, the suspect having been declared fit to stand trial after a long psychiatric expertise. Tetsuya Yamagami, 42, was arrested immediately after the incident in Nara (western Japan), where the former Japanese leader was giving a speech at an outdoor election rally when he was shot dead.

“He was charged today” with “murder and violating the law” on arms control, a spokesman for the Nara court said, confirming information from the Yomiuri daily and the Kyodo news agency ( links in English). Tetsuya Yamagami faces the death penalty if found guilty.

The Moon sect at the heart of the case

Earlier this week, Japanese TV stations aired footage showing his transfer to a Nara police station from a detention center in the nearby metropolis of Osaka, where he had spent the past five months undergoing psychiatric evaluation. .

Shinzo Abe, Prime Minister of Japan in 2006-2007 and 2012-2020, was allegedly targeted by Tetsuya Yamagami for his alleged links with the Moon sect, also known as the Unification Church. The suspect resented this group, to which his mother would have made very large donations in the past, leading their family to ruin. According to local media, his psychiatric examination focused on his relationship with his mother and his family environment.

Shinzo Abe, whose controversial state funeral in Japan was held last September, was not a member of the Unification Church. But he had notably participated in 2021 in a symposium organized by a group affiliated with this sect, like other political figures including former American President Donald Trump. Founded in Korea in 1954 by Sun Myung Moon, this religious organization developed strongly in the 1970s and 1980s, including in Japan. The one that now calls itself the “Federation of Families for World Peace and Unification” has denied any wrongdoing and has pledged to prevent “excessive” donations from its members.

Abe’s murder has sparked a series of revelations about the religious group’s ties to many Japanese lawmakers and has helped to slump the popularity ratings of the government of Liberal Democratic Party chairman Fumio Kishida since last summer. (PLD, conservative right) like Abe before him. Fumio Kishida ordered a government investigation that could result in an order disbanding the Moon sect under Japan’s religious organization law. This order would cause it to lose its tax exemptions, without however putting an end to its activities.