In Madrid, the Prado Museum is embarking on a “transparency operation”. He wants to draw up a list of his works of art looted during the civil war. 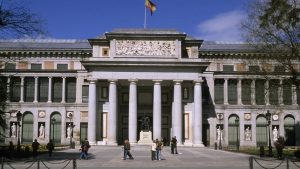 The main building of the Prado in Madrid (Spain). (ROSINE MAZIN / MAZIN ROSINE)

The Prado wants to know precisely which paintings from its collection were seized as spoils of war during the Civil War or Franco’s dictatorship, between 1936 and 1975. It undertakes to then return them to their owners – provided of course that they are identified.

The museum, one of the most important in the world, published on Tuesday September 20 an initial list of 25 works (23 paintings, a fruit bowl and an old clock) which it now knows have been confiscated by the regime. Francoist. And then the list grew: 62 parts in total are concerned.

These are not exceptional works, but there are still paintings by François Boucher, French master of 18th century Rococo art, a snowy landscape by Brueghel the Younger, or portraits by the Spanish impressionist Sorolla. Most of the time, the origin of these tables is still unclear, we will have to investigate.

For this, the Prado has set up a team of researchers led by a heritage expert specializing in the Civil War, Arturo Colorado. They have three months to delve into the archives and submit their report. Difficult task as the course of the works is opaque: many were given to the museum by the “General Commission for National Artistic Heritage” created by Franco, which sometimes got them from another museum, which itself got them from the Commission of seized, which had itself been used illegally in private collections.

Example: One of the mayors of Madrid, Pedro Rico, fled Spain during the war. The Republic has decided to protect its artistic heritage from the bombardments by hiding it in warehouses, to return it once the war is over. But the Francoists, winners of the conflicts, did not return all the works. Some of the works ended up in the Museum of Fine Arts of Asturias and the Prado Museum.

It has not been very long since Spain has been trying to shed light on the seizure of its works of art during the war. During the transition, several laws were passed for the restitution of real estate, but the works of art remained in limbo.

Since 2017, however, all the information collected little by little has been put online, accessible to the general public and to historians, as much to find the works that have been taken abroad as those that have remained in Spain.

At the beginning of September in Bilbao two paintings were returned to a family of the shipowner and Basque nationalist Ramón de la Sota, two works seized by the Franco regime, after one of his heirs had come across them by chance four years earlier in a exhibition at the Parador de Almagro. It was a Goya and a painting by El Greco, which are now exhibited in public institutions.

It was a first. The government wants there to be more. The Minister of Culture has also asked all national museums to carry out research work similar to that of the Prado to clarify the origin of “works which now belong to the State”, to launch restitution procedures and “righting the injustices of the past”.

Today News Post - November 20, 2022 0
The 20th Congress of the Communist Party of China opened on Sunday October 16 and is expected to re-appoint Chinese President Xi Jinping. This...