It is a very controversial project which has just been validated by British justice: that of deporting Rwandan asylum seekers, at a time when Channel crossings are reaching record levels. 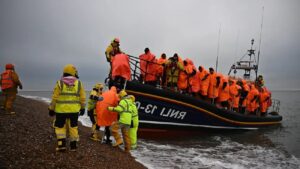 The High Court of Justice therefore said yes. The British authorities will be able to send home, manu militari, the Rwandan asylum seekers who have crossed the Channel, the time to study their file. In exchange, Kigali receives 120 million pounds. But it will still be necessary, assure the judges, to study the particular circumstances of each case.

This fight against illegal immigration was one of the promises of Brexit, the Conservatives have made it their priority. “Seeing a plane take off for Rwanda was my dream for Christmas,” the very right-wing British interior minister, Suella Braverman, recently confided last October. Yet migrants have never been so numerous to cross the Channel. More than 45,000 this year have arrived on English shores, compared to 28,500 last year. And last week another four migrants died attempting the crossing. So far no aircraft has flown to Kigali. The only planned flight was never able to take off after an appeal by the European Court of Human Rights (ECHR).

“After the horrors of war, the trauma of expulsion”, this project is quite simply “cruel”, denounces the NGO Care4Calais. The High Commissioner for Refugees recalled that it was “firmly opposed” to this type of arrangement without guaranteeing migrants sufficient protection upon their return.

What worries UNHCR most of all is that other countries are following Britain’s lead. Italy, for example, extended a $100 million deal with Libya to prevent crossings to Europe. Denmark, which believes that the capital Damascus is now safe, has decided to deprive hundreds of Syrian refugees on its soil of its protection. They no longer have the right to work and have to live in transit centres.

France is not left out. A few weeks ago the Mediapart newspaper revealed that it had met a Syrian in a detention center near Roissy, ready to be sent back to his country at war. His “obligation to leave the territory” has been validated by French justice.

Today News Post - December 4, 2022 0
The torrential rains that have been falling on several regions of Brazil for days have caused floods and landslides. A road affected by a landslide...