India is one of the world’s largest producers of coconuts. Its oil is popular all over the world. The fruit supports four million people in the country. 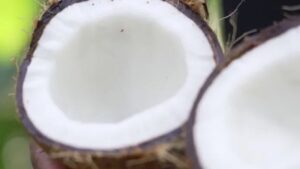 Coconuts grow in the lands of southern India. The country is one of the world’s largest producers. In the region of Kerala, literally “the country of coconut palms”, the plantations stretch as far as the eye can see. But harvesting this fruit is a perilous art. To pick them, you have to climb to the top of the coconut trees, 20 meters high, and using only the strength of your arms and legs. The technique is ancestral, and the job risky.

In India, coconut supports four million people: farmers and traders, but also factories. They produce oil from these coconuts, which is then exported around the world. Coconut oil is indeed a very fashionable liquid, used for cooking as well as cosmetics. In addition to its oil, the husk of the coconut can be transformed into a natural fertilizer. Its filaments are also used to make textiles.