Consequences of the celebrations and the fireworks which accompany them: several cities of the country, in particular New Delhi, find themselves in a thick fog of pollution. 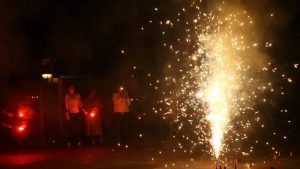 Residents light firecrackers on the occasion of Diwali, the Hindu festival of lights, in a street in Chandigarh, October 24, 2022. (- / AFP)

These are recurring scenes in India in the big cities: the buildings become invisible at more than 50 meters, lost in the haze of pollution. And so this has been the case since Tuesday, October 25 in the morning in the capital, New Delhi, where the micro-particle index is approaching 400, which is 25 times higher than the maximum standard set by the World Health Organization. health (WHO). And the pollution is not only visual: the particles interfere everywhere in this city of 20 million inhabitants.

Breathing may become difficult in some places. Several other major cities are affected, including Mumbai on the Indian Ocean coast. It is therefore a direct consequence of the firing of firecrackers that accompany this Diwali festival, the most important of the Hindu festivals. It’s a bit like Christmas in the West. As Diwali celebrates the lights, the victory of good over evil, Indians are used to setting off fireworks and launching firecrackers in astronomical quantities. And the official bans do not change anything: the municipality of New Delhi had, this year again, refused to authorize the sale of firecrackers, under penalty of six months in prison. It didn’t stop anything.

However, the situation seemed a little better in recent days with pollution levels at their lowest in four years in New Delhi. Because there is a little wind, and then the cold air which flattens the particles on the ground has not yet arrived. It was still 29 today in the Indian capital. Often the Diwali festival falls a little later in the year, rather at the beginning of November; it is then colder and the pollution effect is increased. Nevertheless, the levels recorded on October 25 show that pollution can skyrocket at any moment. With the combination, in this case, of several factors: smoke from firecrackers, automobile pollution (nearly 12 million vehicles in New Delhi), industrial emissions (a coal-fired power station near the city) and the burning traditionally in this season by the farmers of the surrounding countryside. According to a study by the scientific journal Lancet published two years ago, air pollution caused, in 2019 alone, the death of 17,500 deaths per year in New Delhi.

The Indian Prime Minister, he had chosen to escape pollution to celebrate Diwali: Narendra Modi went to altitude, in the valley of the Kargil glaciers. A symbolic place to flatter Indian nationalism: it is there, in the very north of the country, in the Kashmir region, at an altitude of 5000 meters, that India won a military victory 20 years ago against its neighbor. Pakistan. Far from the mists of New Delhi, under the radiant sun of the Himalayas, Narendra Modi, in military uniform, sunglasses and ranger hat, went to meet the soldiers who guard the valley. The Indian Prime Minister also took the opportunity to welcome the appointment of his new British counterpart of Indian origin, Rishi Sunak, whose grandmother had emigrated from Punjab. The fact that this appointment occurred on Diwali day is also interpreted today by many Indians as a sign and revenge against the former British colonizer.