In the heart of the largest mangrove forest in the world, between India and Bangladesh, the women are nicknamed “tiger widows”, because their husbands are devoured by felines who do not intend to be chased from their territory. 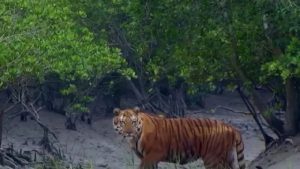 On the borders of India and Bangladesh, in the heart of the largest mangrove forest in the world, women are the collateral victims of a conflict that opposes men to one of the most fearsome animals on the planet: the Bengal tiger. In this jungle, he reigns supreme, and increasingly attacks humans. Some women have thus lost their husbands. They are called “tiger widows”. They are more than 3,000 in the region.

One death every month

Fishing is one of the only means of subsistence in the region. Driven by poverty, men have no choice but to venture into the mangroves to catch a few fish, risking their lives. To prevent attacks, the authorities prohibited access to the jungle and completely fenced it off. But that does not prevent men from entering. The attacks are so numerous that there is one death each month under the claws of felines, and as many wives who find themselves left behind, and fall into extreme poverty.

Today News Post - November 13, 2022 0
Some 200 Ukrainian police were deployed in Kherson to clear mines and document "crimes" attributable to Russian forces, a day after the city was...