An investigation has been opened to determine the causes of the tragedy, which occurred during a religious holiday. 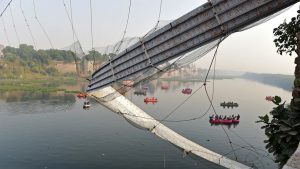 Rescue operations in the aftermath of the collapse of the bridge in Morbi, western India, on October 31, 2022. (SAM PANTHAKY / AFP)

The balance sheet continues to grow. At least 137 people died in India in the collapse of a suspension bridge, Sunday October 30, in the west of the country. The infrastructure, dating from the British colonial era, had just reopened to the public after months of work. Rescue operations are still underway on Monday morning, while an investigation to determine the causes of this tragedy was opened. Here is what we know about this fatal accident.

233 m long, the pedestrian bridge of the city of Morbi spans the Machchhu River in the state of Gujarat. On Sunday evening, around “250 to 300 people” gathered on this bridge to celebrate a religious holiday, according to the first report from the city’s police, quoted by The Indian Express*. CCTV footage shows the structure swaying before suddenly giving way.

“The bridge was full of people,” a local resident told AFP. Shortly after dark, “the cables gave way, the bridge collapsed in a fraction of a second. People, first falling on each other, fell into the river.” According to the BBC*, dozens of people tried to cling to the bridge. “We helped people who were able to swim to shore but we couldn’t save most of those who fell into the river,” a witness told AFP.

What is the balance sheet?

The accident killed at least 137 people, including fifty children, according to the latest report released Monday afternoon by the local police. From Sunday evening, the Indian Prime Minister, Narendra Modi, called for “the urgent mobilization of rescue teams”. Extensive rescue and search operations were launched, involving divers, dozens of soldiers and the coast guard. For now, local authorities, quoted by the BBC, ensure that at least 177 people have been rescued. At least 15 people have been hospitalized.

But the night complicated the holding of relief operations. “The water is stagnant and there is sewage in the river. Visibility was poor, so it was difficult to spot the bodies,” Prasanna Kumar, commander in charge of operations, told the British media. 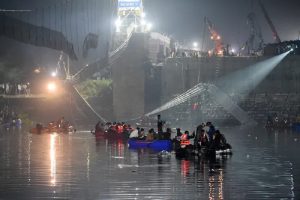 Rescue operations on the night of October 31, 2022, after the collapse of the bridge in Morbi, western India. (SAM PANTHAKY / AFP)

The search continues Monday morning, when more bodies were discovered in the rubble of the bridge. “We will search the whole river and leave no room for doubt,” assured Prasanna Kumar. The supply to the river from a downstream dam was also cut off to reduce the water level and speed up the search.

What about bridge safety?

A team of five investigators was appointed to determine the causes of the bridge collapse. A complaint against X for manslaughter has been filed. According to local media, the suspension bridge was built in 1880, during the British colonial era, with materials imported from England. Closed in March for seven months of renovation work, it was reopened to the public on Wednesday, but without a security certificate having been issued by the authorities.

“The bridge is owned by the municipality of Morbi, but we entrusted it to the Oreva group a few months ago for maintenance and operation for a period of 15 years”, explained Sandeepsinh Jhala, head of the municipality. de Morbi, in the columns of The Indian Express*. “The private company opened the bridge to visitors without informing us and as a result we were unable to obtain a security audit of the bridge.”

Nine people, all associated with a company providing maintenance for this work, which had just been renovated, were arrested on Monday by the police. They are being investigated for manslaughter, Rajkot District Inspector General Ashok Kumar Yadav said in a statement.

Accidents involving old and poorly maintained infrastructure are common in India, especially bridges. In 2016, a footbridge broke over a busy street in the eastern city of Calcutta, killing at least 26 people. In 2011, at least 32 people died when a bridge collapsed on which a crowd was celebrating a festival in northeast India, about 30 km from the city of Darjeeling.

Today News Post - November 4, 2022 0
Disneyland Shanghai closed its doors on Monday, December 31 following the detection in this city of cases of Covid-19. Visitors present at the time...