The authorities estimated that 500 people were on the building when it gave way, raising fears of a much heavier toll. 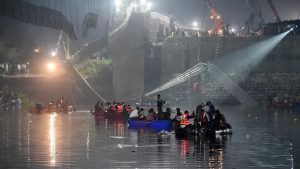 Rescuers carry out search operations after the collapse of a bridge over the Machchhu river in Morbi (India) on October 31, 2022. (SAM PANTHAKY / AFP)

At least 137 people died in the collapse of a suspension bridge spanning a river in the state of Gujarat, in western India, Sunday October 30, said a local official. “The toll is likely to continue to rise as search operations continue,” said P. Dekavadiya, police chief for the town of Morbi, where the crash happened.

Most of the victims drowned in the river. “More than 82 people have been rescued,” another local government official said earlier. It is not known whether other missing persons are still being sought.

Authorities estimated that 500 people, including women and children, were celebrating a religious holiday on and around the bridge when the cables supporting it gave way shortly after dark. This bridge, dating from the British colonial era, had just reopened to the public after months of work.

Prime Minister Narendra Modi, who was in Gujarat, where he is from, called for “the urgent mobilization of rescue teams” and the provision of aid for all victims, his cabinet tweeted.