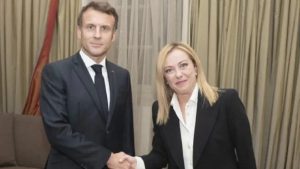 Emmanuel Macron has been traveling to Rome, Italy, since Sunday October 23. The Head of State, who will be received by the Pope on Monday, met the new Italian Prime Minister Giorgia Meloni on Sunday evening. A tete-a-tete which took place in all discretion “for political and ideological reasons”, indicated the journalist Anne Bourse, special correspondent in Rome for the 8 Hours of France 2, Monday. “The rift between the two leaders is great. It was finally last night, in a large hotel, that Emmanuel Macron and Giorgia Meloni saw each other for a little over an hour,” added the journalist.

Giorgia Meloni was sworn in as head of Italy on Saturday, taking the oath as president of the Italian Council of Ministers. “Impossible for Emmanuel Macron not to see Giorgia Meloni,” said Anne Bourse. Emmanuel Macron is thus “the first head of state to speak with the post-fascist leader”, continued the special envoy for France Televisions. The meeting between the two leaders was described as “frank” and “pragmatic” by France, while the meeting was considered “fruitful” for Giorgia Meloni.