While Moscow accuses kyiv of preparing a “dirty bomb”, Emmanuel Macron still wants to believe that “peace is possible”. 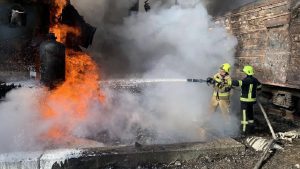 Ukrainian firefighters try to put out a fire at energy facilities, in the Rivne region (western Ukraine), on October 22, 2022. (VITALIY KOVAL TELEGRAM / AFP)

As a peace summit was held in Rome on Sunday October 23, the Kremlin accused Ukraine of preparing to use a “dirty bomb”. Allegations rejected by kyiv and Washington who say they fear a pretext for an escalation. Summarizes the information to remember from this day.

In telephone conversations with NATO countries, Moscow accused Ukraine of preparing to use a “dirty bomb”. Russian Defense Minister Sergei Shoigu spoke by telephone on Sunday with his American, French, British and Turkish counterparts. He told most of his interlocutors of “his concerns about possible provocations on the part of Ukraine with the use of a ‘dirty bomb'”, according to his ministry.

“Russian fabrications about Ukraine preparing to use a ‘dirty bomb’ are as absurd as they are dangerous,” Ukrainian Foreign Minister Dmytro Kouleba reacted on social media early Sunday evening. “If Russia calls and says that Ukraine is preparing something, it means only one thing: Russia has already prepared all this. I believe that now the world must react as harshly as possible”, for its hand lambasted Ukrainian President Volodymyr Zelensky.

The United States rejects “the clearly false allegations of Minister Shoigu”, reacted the White House, warning that “the world would not be fooled in the event of an attempt to use this allegation as a pretext for an escalation”.

“Peace is possible” in Ukraine when the Ukrainians “decide it”, declared Emmanuel Macron on Sunday at the opening of a summit for peace in Rome. “At some point, depending on the evolution of things and when the Ukrainian people and their leaders have decided, in the terms they have decided, peace will be built with the other, who is the enemy of ‘today, around a table,’ said the French president during a speech at the opening of this summit organized by the Italian Catholic community Sant’Egidio.

While supporting Ukraine diplomatically and militarily, the French head of state has assumed since the start of the Ukrainian conflict in February to continue to speak to his Russian counterpart Vladimir Putin, unlike other Western leaders and in particular the American president. Joe Biden.

The Ukrainian national operator Ukrenergo carried out power cuts in kyiv (Ukraine) on Sunday in order to “stabilize” the supply of electricity after repeated Russian strikes targeting the country’s infrastructure. “On October 23, stabilization cuts took place in kyiv to avoid accidents,” announced the Ukrainian private electricity supplier DTEK. This specifies that these cuts, which alternately affect the different districts of the capital, should not last more than four hours.

Ukrainian President Volodymyr Zelensky has called on his people to consume energy “even more conscientiously than before” as Russian forces continue to strike at the country’s energy infrastructure. “The stability of our public energy industry depends on it, in every city or district of Ukraine.” For the leader, “the main target of Russian terrorists is energy”.

More than a million homes without electricity

According to an adviser to the Ukrainian presidency, Kyrylo Tymoshenko, more than a million Ukrainian homes are without electricity, after Russian strikes on energy infrastructure in the country. He clarified: “672,000 subscribers were disconnected in the Khmelnytskyi region, 188,400 in the Mikolaiv region, 102,000 in the Volyn region, 242,000 in the Cherkasy region, 174,790 in the Rivne region, 61 913 in the Kirovograd region and 10,500 in the Odessa region.”

Today News Post - November 13, 2022 0
The explosion took place in a busy street in the capital. According to the governor of the city of Istanbul, the injured were taken...