Giorgia Meloni, the far-right Italian Prime Minister, was first sworn in before the President of the Republic on Saturday October 22. 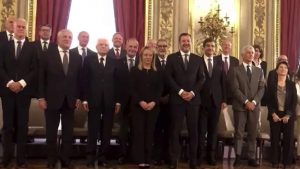 The first Italian government family photo was taken on the morning of Saturday, October 22. In the presidential palace, Giorgia Meloni was sworn in first before the President of the Republic. “I swear to be faithful to the Republic and to respect the Constitution and the laws,” she said. To form her government, the new president of the council wanted to go quickly. Barely in charge, she appeared in a united coalition, ready to govern.

“We have to face the emergency nationally and internationally,” assured Giorgia Meloni. The Prime Minister has shown that she has mastered her allies and has surrounded herself with reassuring personalities for international bodies such as Antonio Tajani, MEP and former President of the European Parliament. He becomes Minister of Foreign Affairs. The transfer of power between Mario Draghi and Giorgia Meloni will take place on Sunday 23 October.

Today News Post - November 11, 2022 0
In diplomatic conflict for several days with Italy about the reception of migrants present on the boat, Gerald Darmanin announced, Thursday, November 10, at...