The government team formed by the leader of the far-right Fratelli d’Italia party was sworn in on Saturday morning. Objective of the new President of the Council: to show that she wishes to reassure the partners of Italy, the founder of Europe and the third economy of the European Union. 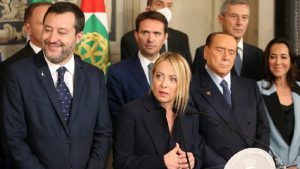 Giorgia Meloni, the President of the Italian Council, surrounded by Matteo Salvini (the League, far right), her Minister in charge of Infrastructure and Transport (on the right in the photo), and Silvio Berlusconi (leader of Forza Italia), in Rome, the Italian capital, on October 21, 2022. (BARIS SECKIN / ANADOLU AGENCY / AFP)

He gave him the silver bell used by the President of the Council to regulate the debates in the Council of Ministers. The transfer of power between Mario Draghi and Giorgia Meloni, the new President of the Italian Council – the equivalent of Prime Minister – took place on Sunday October 23, during a ceremony organized at Palazzo Chigi in Rome, seat of the two-member government. not from Parliament.

The government team formed by the leader of the post-fascist party Fratelli d’Italia shows that it wants to reassure Italy’s partners, worried after the arrival in power of a leader of the extreme executive right and the most eurosceptic government in Italy since 1946. “There is no surprise”, Herve Rayner, professor of political science at the University of Lausanne, specialist in contemporary Italy. “Fratelli d’Italia [the party of Giorgia Meloni] obtains ten ministries. The two other unity parties, Forza Italia [of Silvio Berlusconi] and the League [of Matteo Salvini], have five ministries each”, notes- looks back on five posts shedding light on the balance found by the new strong woman of Italy for her first government.

In Foreign Affairs, a former President of the European Parliament 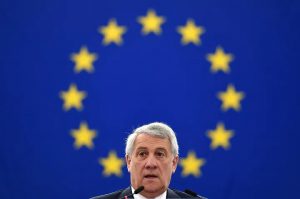 Antonio Tajani, the current Italian Minister for Foreign Affairs, at the European Parliament, in Brussels, on July 3, 2019. (FREDERICK FLORIN / AFP)

Although Eurosceptic, Giorgia Meloni has placed Antonio Tajani at the head of Italian diplomacy. This convinced Europeanist, who also finds himself with the title of Deputy Prime Minister, was President of the European Parliament between 2017 and 2019. The appointment of this senior official of the Forza Italia party of Silvio Berlusconi was quickly welcomed by the President of the Party popular European, the German Manfred Weber, as “a guarantee of a pro-European and Atlanticist Italy”. The ties forged by Tajani over almost twenty years as an MEP and European Commissioner for Transport will be essential to maintaining good relations with Brussels.

On the diplomatic front, Giorgia Meloni, an Atlanticist and in favor of supporting Ukraine against Russia, was forced to step up after Silvio Berlusconi’s remarks. The latter had declared to have “reconnected” with Russian President Vladimir Putin, and accused Ukraine of being at the origin of the war. She then retorted that Italy was “fully part and with its head held high” of Europe and NATO.

In Transport, the populist Matteo Salvini 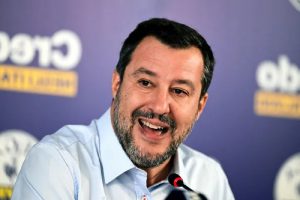 Known for his controversial statements, particularly on immigration, Matteo Salvini was already Deputy Prime Minister and Minister of the Interior in the first government of Giuseppe Conte, from June 2018 to September 2019.

He hoped to find the Interior portfolio in the Giorgia Meloni government but he had to be content with the post of Infrastructure and Transport. If he is less prestigious, this position allows him to have control over the country’s ports. Under the League’s “closed ports” policy, he had blocked several NGO ships coming to the aid of migrants in the Mediterranean when he was interior minister. Above all, he still finds himself propelled Deputy Prime Minister.

At the Economy, a former member of the outgoing government 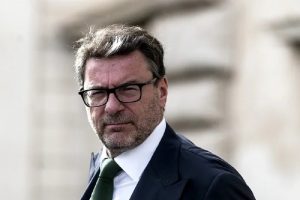 Giancarlo Giorgetti, the current Italian Minister of Economy, in Rome, the capital of Italy, on October 22, 2022. (ANGELO CARCONI / ANSA / AFP)

Giancarlo Giorgetti, one of Matteo Salvini’s right-hand men, is a representative of the moderate wing of the League (extreme right). Already a member of the outgoing team of Mario Draghi, as Minister of Economic Development, he finds himself Minister of the Economy, a crucial portfolio.

A powerful figure in the League, he already served in the first government of Giuseppe Conte, including the League and the populist Five Star movement (2018 to 2019), as Secretary of State for Sports.

Inside, a technocrat who was Matteo Salvini’s chief of staff 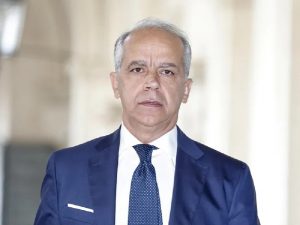 Matteo Piantedosi, who has been prefect of Rome since August 2020, takes over the interior ministry, a key portfolio for a nationalist government, which considers security and immigration issues to be priorities and strategic. At 59, he has spent his entire career in the prefectural body and the senior civil service, largely in the Ministry of the Interior, where he was chief of staff to Matteo Salvini.

To the Family, Birth Rate and Equal Opportunities, Eugenia Roccella 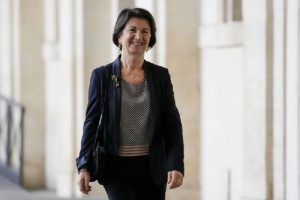 Among the 24 ministers of this new government, there are only six women. Some are confined to minor portfolios. “None has a ministry of weight, be it the Interior, the Economy, Defense or other”, remarks Hervé Rayner, specialist in contemporary Italy.

But Eugenia Roccella finds herself Minister of the Family, Natality and Equal Opportunities. This position is highly symbolic for Giorgia Meloni, a conservative Christian hostile to LGBT + rights, who has put the family at the heart of her campaign. She “defends a very conservative vision, with ‘God, family and country’ as central values”, insisted Alban Mikoczy, correspondent for France Televisions in Rome. The new title of the portfolio is therefore not insignificant.

Today News Post - November 30, 2022 0
The NGO calls in particular for the termination of contracts with the Russian group Rosatom and its subsidiaries. The Rosatom group stand at the World...