Sepp Blatter regretted the awarding of the 2022 World Cup to Qatar, in an interview with the German agency SID. 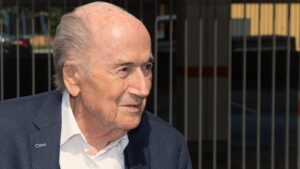 Sepp Blatter at the exit of the building of the Office of the General Prosecutor of Switzerland, on August 9, 2022 in Zurich. (SEBASTIEN BOZON / AFP)

“A mistake”. This is the term used by Sepp Blatter in an interview granted, Tuesday, November 8, to the German agency SID, a subsidiary of AFP, to qualify the attribution of the 2022 World Cup to Qatar. “Awarding the World Cup to Qatar was simply a mistake. For me, the country was too small, it is as big as a canton here in Switzerland,” said the man who led the world football body between 1998 and 2015. .

The Swiss also mentioned “a consensus within the executive committee of Fifa” about a preference for the United States as host country, instead of Qatar, to succeed Russia in 2018. A broken consensus a week before the vote according to him, during a lunch at the Elysee with the former French president, Nicolas Sarkozy, the crown prince of Qatar, Tamim ben Hamad al Thani, and the former president of UEFA, Michel Platinum. “The quintessence was that I could no longer count on the four votes of Europe for the United States”, he adds, while Nicolas Sarkozy would have “advised” Michel Platini to vote for Qatar .

Blatter in favor of a compensation fund

Sepp Blatter also said he was in favor of the creation of “a fund of the order of magnitude of the bonuses paid to the 32 participants [approximately 420 million euros], or even double”, to compensate migrant workers who have suffered human rights abuses in the emirate. Sepp Blatter, who was acquitted at first instance by the Swiss courts in mid-June, along with Michel Platini, for suspicion of fraud in the exercise of his functions at FIFA in 2015.