At the end of the midterm elections, the American president welcomed his party’s score, comparing it to the midterms of the past forty years. But judging by estimates from the partial results, the Democrats’ score will also not be marked by historic success. 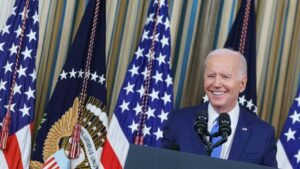 US President Joe Biden welcomes his party’s result the day after the midterm elections, November 9, 2022, in Washington.

A defeat less harsh than expected. Two days after the midterm elections were held, the Democrats risk losing the narrow majority they had in the House of Representatives. But without the Republican tidal wave that had been announced by certain polls. The final results of the ballot are not yet known, but that did not prevent Joe Biden from congratulating himself on Wednesday, November 9, during a press conference.

“While the press and polls were predicting a red wave, it didn’t happen. We lost fewer seats in the House of Representatives than any Democratic president in their first midterm election in forty years.” , he said, hailing “a good day for democracy”.

Of the 220 seats Democrats held in the House of Representatives before the election, how many are they likely to lose? And is it really unprecedented in recent decades? verified the assertion of the American president.

According to estimates, between 6 and 19 fewer seats for the Democrats

According to the partial results of Thursday November 10, given by the Associated Press* agency, we only know the color of 391 seats out of the 435 in the House of Representatives: 207 for the Republicans, 184 for the Democrats. There remain 44 seats pending. To understand where Joe Biden draws his analysis, we must look at the estimates made by the American media, based on historical scores by state and by district, the candidates in the running, and therefore the probabilities that each remaining seat will go to one side or the other.

Thus, according to the New York Times*, the Democrats would pocket 202 seats in the worst case scenario and 217 in the most favorable scenario. These estimates differ depending on the media. Bloomberg* counts between 201 and 220 for the Biden camp, FiveThirtyEight* gives between 203 and 216, and the Washington Post* counts on 214 or 215 seats. Result, by retaining the worst and the best hypotheses, we can estimate that the Democrats will probably obtain between 201 and 220 seats. That is a net loss of 2 to 19 seats compared to the outgoing hemicycle.

Midterms are almost always against the presidential party

Although the Democratic Party arithmetically loses seats, and potentially the majority in the House of Representatives, this does not necessarily represent a more stinging defeat than in previous midterm elections. These polls are generally positive for the opposition, thanks to the desire of voters to put in place a stronger counter-power against the president.

In fact, in the 19 previous midterm elections, the president’s party, whether Democratic or Republican, has only won seats twice. On average, between 1946 and 2018, he even lost 26. The Biden camp therefore did indeed limit the breakage.

The biggest failure was recorded by Barack Obama in 2010. That year, the Republicans took 63 seats from the Democrats in the lower house. The Conservatives are not spared, either, from the sanctions votes during the mid-term elections. In 2018, Donald Trump thus faced a “blue wave” and saw his party lose 40 votes in the House of Representatives.

Probably no record for these midterm elections

Do these elections constitute a record for the Democrats, as Joe Biden suggests? In his satisfaction, the American president takes care to add important details: he only compares the first mid-term elections of Democratic presidents, and not those that took place during a second term. Out of ten midterms, only two correspond to these criteria: 1994 (when Bill Clinton was in power) and 2010 (during Obama’s first term). As the graph above shows, the first led to a loss of 52 seats for the Democrats, and the second 63. If the estimates for 2022 are confirmed, even with the worst case scenario for Joe Biden’s party, his statement is therefore correct.

In 1998, voters sanctioned Republicans, who launched impeachment proceedings against Bill Clinton after his affair with Monica Lewinsky. The impeachment attempt, deemed abusive by some Americans, played in favor of the Democratic president. In 2002, the mid-term elections took place a little over a year after the September 11 attacks, allowing George W. Bush to take advantage of his popularity rating, which was then around 68%.

Today News Post - October 25, 2022 0
It is one of the deadliest conflicts on the planet: the war in northern Ethiopia in East Africa has been going on for two...