According to Safeguard Defenders, the Chinese government has set up more than fifty unofficial agencies around the world, including three in Paris. The objective is to help Chinese nationals in their administrative procedures but also to control their activities. 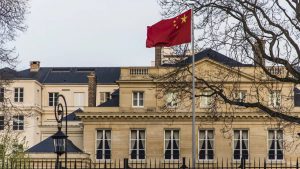 A Chinese flag in front of the Chinese Embassy in France, in Paris, in 2021. (VINCENT ISORE / MAXPPP)

The investigation was published last month, but it comes to light at the end of October as Xi Jinping begins an eternal and uncompromising term in the leadership of China. According to the NGO Safeguard Defenders, the Chinese government has established more than 50 unofficial police offices abroad. These agencies are mostly located in the European Union: in Paris (three agencies), the Netherlands, the United Kingdom, Ireland, but also in Canada, particularly in the city of Toronto. Kinds of unofficial offices of the Chinese police.

Safeguard Defenders explains that these sites are partly used to help Chinese nationals with administrative procedures such as obtaining a driver’s license. As far as France is concerned, the Chinese government in 2017 officially requested the French authorities the right to deploy Chinese police deputies to Paris to protect Chinese tourists after a series of attacks. But, according to the human rights NGO, the Chinese police have also used these offices to carry out surveillance operations, abroad, of the Chinese diaspora.

Grateful to see global interest in our #110Overseas investigation on the PRC’s clandestine police stations around the world.

For more background re China’s national legal framework for these policing operations & stories of those “persuaded to return” ? https://t.co/uLrAAlYe6W pic.twitter.com/cWwaaCnJfI

In the crosshairs of Chinese power, says Safeguard Defenders, are notably Chinese tax evaders, dissidents and all those who criticize the regime of Xi Jinping. Between April 2021 and July 2022, 230,000 Chinese citizens were forced to return to their country according to the NGO. Chinese authorities are relying on a law passed last month in Beijing declaring the extraterritoriality of crimes committed by Chinese citizens abroad.

An investigation opened in the Netherlands

In Europe, the investigation by Safeguard Defenders reveals in particular the case of dissident Wang Jingyu who dared to criticize the Chinese regime on social networks. He took refuge in the Netherlands but continues to be tracked down by Beijing and even threatened, as he told the NGO. Wang Jingyu says he received a call in early 2022 from an officer from the Chinese police station in Rotterdam. The Dutch Ministry of Foreign Affairs confirms that it is investigating the presence of these offices located in the Netherlands. Such installations would be contrary to the Vienna Convention on diplomatic practices, says the ministry, specifying that it has not “been informed through diplomatic channels”.

In Canada, a memorandum of cooperation between Canadian and Chinese police exists for fugitives but a former Canadian diplomat says it is a front for other activities. The Canadian Gendarmerie is also investigating. In Paris, police officers from the Chinese Ministry of Public Security have been spotted in demonstrations of support for the Uyghurs. Several countries have launched investigations but for the moment France has not reacted officially. As for the Chinese Ministry of Foreign Affairs, it denies the information in the Safeguard Defenders report.

Today News Post - October 26, 2022 0
If he sees no inconvenience not to drink and to avoid "shooting the neighbour", Willy Schraen is on the other hand fiercely opposed to...