Lagos must respond to a major demographic challenge. With 88 million inhabitants estimated in 2100, the economic capital of Nigeria will become the most populous city in the world. 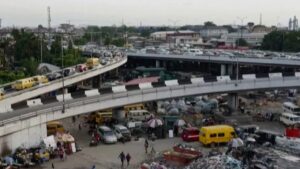 In the maternities of Lagos, Nigeria, the birth rate is high. The economic capital of the country must overcome a major demographic challenge. Today, the megalopolis has 20 million inhabitants. By 2100, the population is expected to rise to over 88 million. Lagos will thus become the most populous city in the world. Getting around today in the megalopolis has become a nightmare. It is impossible to avoid monstrous traffic jams, which paralyze Lagos almost 24 hours a day.

“Stress is part of Lagos and our daily life. People are very stressed because of traffic,” said one resident. To better prepare for the future, the authorities have launched major projects, such as a future urban metro that will cross the city. The current and antiquated system of maritime means of transport will also be completely reviewed. By 2100, Nigeria is expected to be the second most populous country in the world, with 800 million people, and huge environmental challenges to overcome.