Four years after the Aquarius, Emmanuel Macron has this time decided to host the Ocean Viking in France, Friday November 11. His political opponents came to Toulon (Var) to express their disagreement with the French president and their support for Giorgia Meloni, president of the Italian Council. 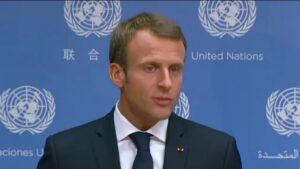 The two ships have the same red hull, but four years apart, their fate is different. In June 2018, the Aquarius had more than 600 migrants on board. France refuses to allow it to land in Marseille (Bouches-du-Rhone). The boat then sailed to Spain. So why did Emmanuel Macron change his mind by letting the SOS Mediterranee boat dock this time? An adviser to the executive says: “This time it’s France, because the humanitarian situation on board did not allow us to wait any longer.”

Another adds: “We managed the unacceptable, we don’t do politics.” However, the case becomes political. At the European level, a standoff is engaged with Italy. This morning, Giorgia Meloni denounced the attitude of Paris. Eric Zemmour went to Toulon (Var) to protest. From Friday afternoon, November 11, the Minister of the Interior reinforced controls at the Franco-Italian border. The government wants to project an image of firmness.