She and Richard Madden received the same salary for filming in the American series “Citadel”. A situation that has never happened in Bollywood where this Indian actress has shot around sixty films. 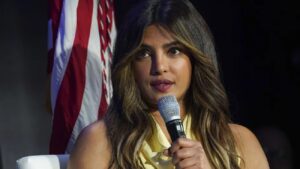 He is a true icon, in India and far beyond. Elected Miss World in the year 2000, she shot sixty films in Bollywood and a handful of others in Hollywood, including the latest Matrix. At 40, Priyanka Chopra has had nothing to prove for years. However, she had to wait until this year to get the same salary on a film as her male partner, American actor Richard Madden, with whom she shares the poster for the sci-fi series Citadel which will be released soon on Amazon Prime.

“In 22 years of career, she told the BBC, this is the first time that this has happened to me, and it happens in the United States on a Hollywood production, because in Bollywood, in India, I don’t I’ve only ever had 10% of my partners’ salary.” A study published by Forbes in 2017 gave the same difference. Priyanka Chopra explains that it is not for lack of having negotiated, “like all the actresses of my generation elsewhere, simply, we never won our case”.

A role model for young girls

She tells how much, herself, on her first shoots, had integrated this difference, how much she found “completely normal” for her to remain wisely on the set, waiting for hours, while her male alter-egos, they went about their business, left, came back, made the whole team wait. To justify the pay gap, she is told that she is too fat, too bland, that her skin is too dark. But she was the one cast in the role, and her films have been doing millions of admissions.

Priyanka Chopra is an international star. She is a role model for thousands of little girls, girls whose rights she defends during her travels as a Goodwill Ambassador for Unicef, in Bangladesh, Ethiopia, Zimbabwe and India. Girls to whom she can say: a woman is worth as much as a man, parity is your first right. “The important thing for me is to use my voice, says the actress. I do it for those who don’t have this power and, basically, I think that’s the most impactful role. of my life.”

Today News Post - November 30, 2022 0
During a telephone exchange with the boss of the social network, European Commissioner Thierry Breton recalled that Twitter will have to “considerably strengthen content...