Although the tone was less aggressive than in previous debates, the two opponents in the second round had a tense exchange on Sunday. 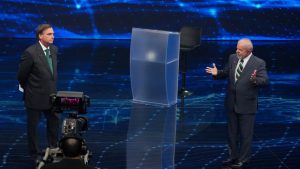 Lula (left) and Jair Bolsonaro, during the first debate of the between-two-rounds of the presidential election, October 16, 2022 in Sao Paulo. (PAULO LOPES / ANADOLU AGENCY / AFP)

Attacks flared between former socialist president Lula and his rival, outgoing president Jair Bolsonaro. During the first televised debate facing the two opponents of the second round of the Brazilian presidential election, Sunday, October 16, the two men insulted each other, even if the tone was less aggressive than during the previous debates, in the presence of the other candidates. “Lula, you should go home, enjoy life, rather than return to the scene of the crime. You are a national disgrace!”, Launched the far-right candidate, Jair Bolsonaro, castigating the “corruption in abundance in Brazil” during the two mandates of his adversary.

Lula, for his part, did not hesitate to call the outgoing president a “little dictator”. He accuses him in particular of wanting to increase the number of judges of the Supreme Court to weaken the judiciary.

The second round promises to be hotly contested in this polarized election. In a latest Datafolha poll published on Friday, Lula tops the voting intentions in this election which will take place on October 30, with 53% of the votes cast against 47% for Jair Bolsonaro. In the first round, the socialist obtained 48.3% of the vote, against 43.2% for the far-right president.

Attacks on the management of the Covid-19 pandemic

The former left-wing president (2003-2010) showed himself to be more to his advantage at the start of the debate, notably castigating his opponent’s management of the Covid-19 pandemic. “Because of your negligence, more than 680,000 people died of Covid-19 in Brazil, while more than half could have been saved,” said Lula, referring in particular to delays in the purchase of vaccines.

But the current head of state recovered towards the end, with spades on the theme of corruption, in particular the vast scandal around the public oil company Petrobras. “Lula, stop lying, a man of your age!” Subsequently launched Jair Bolsonaro, 67. “You are the king of false information, the king of stupidity,” retorted Lula, 76.

Jair Bolsonaro also accused the former metalworker of “not having the slightest concern for the poorest”. He was pleased to have had exceptional expenses approved, amounting to 600 reais (about 97 euros) per month for the allowances paid to the most modest families.

Today News Post - December 3, 2022 0
Three migrants from Lagos (Nigeria) were rescued on Monday November 28 in the port of Las Palmas, in the Canary Islands. They spent eleven...