Elected on Sunday, the one who has already been in power from 2003 to 2010 will lead a deeply divided country after the mandate of his far-right rival. 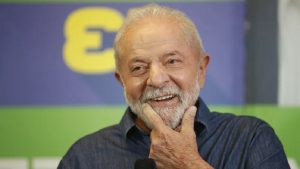 Lula is back. The former head of state won the second round of the presidential election in Brazil with 50.9% of the vote against the outgoing far-right president, Jair Bolsonaro (49.1%), according to official results almost final published Sunday, October 30 by the electoral commission (content in Portuguese), after the election.

The candidate of the Brazilian left reacted on Twitter, shortly before the formalization of the results, by publishing a photo of his hand resting on a Brazilian flag, accompanied by a single word: “Democracy”.

Luiz Inácio Lula da Silva came first in the first round with 48.43% of the vote, against 43.20% for his rival. Faced with Jair Bolsonaro and his populist outings, Lula campaigned at the center of the political spectrum. The debates mainly revolved around purchasing power, eroded by the rise in energy prices, a sharp increase in inequalities and galloping inflation. The elected president has promised to strengthen social protection.

A left-wing icon that comes from afar

The 77-year-old left-wing icon already led the country from 2003 to 2010. He then went to prison. Found guilty of corruption and imprisoned in 2018, he was released in 2019, and his convictions were overturned in 2021 by the Supreme Court, which did not however clear him.

During his two previous mandates, Lula had implemented ambitious social programs and lifted nearly 30 million Brazilians out of poverty. Wanting to reassure the markets, he also promised to restore Brazil’s reputation on the international scene, after four years of isolation.

The task promises to be difficult. Without a clear majority in Parliament and while several states are led by members of the camp of the outgoing president, Lula should have difficulty in applying his program.

After a violent campaign, during which several political activists were assassinated, the Brazilian population is fractured between an ultraconservative camp and a progressive camp. “There are two countries that no longer speak to each other in Brazil, families are divided and argue over politics”, research director at the Institute of International and Strategic Relations, specialist in Latin America.

Lula and his new government are due to take office on January 1, 2023, when Jair Bolsonaro’s term ends. The far-right Brazilian president said on October 21 that he would recognize a possible defeat provided that “nothing abnormal” occurs during the vote.