The electoral campaign is back at full speed, after the first round of the presidential election. Former left-wing president Lula and outgoing far-right president Jair Bolsonaro have just over three weeks to convince the undecided. 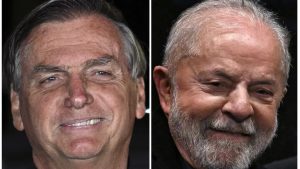 Lula (left) and Jair Bolsonaro, qualified for the second round of the presidential election in Brazil, October 3, 2022. (NELSON ALMEIDA / AFP)

First you have to do some arithmetic. At the end of the first round, five points separate Lula, just over 48% of the vote, from Jair Bolsonaro, just over 43%. This represents six million voters. However, the two candidates who came 3rd and 4th, Simone Tebet and Ciro Gomes, weigh 7%, or 8 million voters. The priority for the finalists is therefore to rally these eight million Brazilians. And in this little game, Lula is one step ahead.

Ciro Gomes, even if he is personally angry with Lula, of whom he was one of the ministers, has already given his support to the left-wing leader. From the end of the lips but all the same. “It’s the only solution,” he said. Simone Tebet, tagged in the center right, has not yet spoken. But on a personal level, she will no doubt also support Lula, because she is very committed against Jair Bolsonaro. His party is more divided.

Opposite, the far-right outgoing president hopes above all, to catch up, to convince the abstainers from the first round: 21% abstention on Sunday, October 2. And so he gets his followers to talk: Judge Sergio Moro (the man who had sent Lula to prison for corruption before seeing the procedure canceled), the governors of the southern states like Claudio Castro in Rio. All have already called to rally Jair Bolsonaro against “the Lula threat”.

The campaign is also restarting via numerous videos on social networks. The Bolsonaro team highlights the support, in video, of foreign personalities, such as former Israeli Prime Minister Benjamin Netanyahu. Or like former President Donald Trump, who filmed himself in his private jet where he said: “To the people of Brazil, I say: you have the opportunity to re-elect a fantastic president, a fantastic man, one of the greatest presidents in the world, Bolsonaro”. Lula, for his part, wants to convince more centrist voters, and especially believers.

He therefore appeared on Tuesday, October 4 on video with Franciscan priests. And he published a poster for evangelicals, a quarter of the electorate, largely won over to Jair Bolsonaro. Lula affirms in it “to believe in God and to have never made a pact with the Devil”, a response that has become essential in the face of accusations from the far right. And Lula also released a very short video where we see him smiling, in combative mode, as if to reassure his supporters and launch “We’re going to work now, because we have an election to win”!

The mystery remains on the other hand on the organization of televised debates by the second round on October 30: the negotiations are difficult between the two camps and the different channels. There are five debate proposals. The first was originally scheduled for next Sunday, October 9, on the Bandeirantes channel, but there is no agreement at the moment. There are four other proposals, in particular that of the group SBT CNN on Saturday October 22, and that of the large Brazilian chain O Globo on Friday 28, 48 hours before the ballot. Not sure that Lula, quite inefficient during this exercise before the first round, agrees to do more than two debates by October 30.