The Rio-Paris flight crash trial opened on Monday, October 10, thirteen years after the tragedy that claimed the lives of 228 people. Airbus and Air France are on trial for manslaughter. 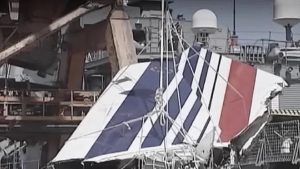 Guillaume Gaury, CEO of Airbus, spoke on Monday, October 10, during the trial of the crash of the Rio-Paris flight. He assured to share the distress of the families of victims. However, this compassion comes too late for some. “There was not a gesture, a word, with regard to the families. And all of a sudden, on the first day of a trial, you come to declare this sudden empathy. It is simply scandalous” , critic Ophelie Toulliou, civil party.

Thirteen years ago, on June 1, 2009, 228 people died in the plane crash. Anne Rigail, CEO of Air France, also supported the victims, while refuting any negligence. Both companies are on trial for manslaughter. They are accused of having underestimated the seriousness of probe failures and of not having sufficiently trained the pilots in these risks. “The main expectation of the families of victims (…) is to have a declaration of guilt”, explained Me Sébastien Busy, lawyer for civil parties. Air France and Airbus incur a fine of 225,000 euros.

Today News Post - October 22, 2022 0
The international relations teacher analyzes recent democratic setbacks in Burkina Faso, Mali and Guinea. Maintenance. A man reads a newspaper on which appears on the...