Prime Minister Elisabeth Borne again engaged the government’s responsibility on Thursday on the revenue part of the Social Security financing bill by means of article 49.3 of the Constitution. 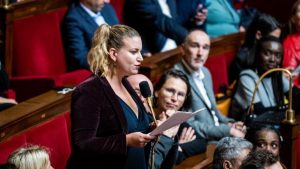 This live is now over.

The deputies of the left alliance Nupes tabled a new motion of censure against the government after the triggering, Thursday, October 20, of 49.3 to pass the revenue part of the social security budget without a vote, announced the boss of the LFI group. , Mathilde Panot. “We are going to table a motion of censure again”, like Wednesday after the use of 49.3 also on the state budget, she declared to the press. “Double 49.3 equals double motion of censure”, she launched, surrounded by elected officials from the left.

The 49.3 activated again. Prime Minister Elisabeth Borne again engaged Thursday, in the National Assembly, the responsibility of the government on the revenue part of the Social Security financing bill by means of article 49.3 of the Constitution, which allows the adoption of the text without a vote, except motion of censure. “You rejected the first part of the text. Above all, you distorted the second part”, which was rejected. “We cannot take the risk of a new rejection or a text, again, distorted”, argued before the deputies the head of government, deprived of an absolute majority.

The examination of the Social Security financing bill (PLFSS) for 2023 begins with a rejection. Article 1, which relates to the 2021 accounts, did not pass (66 votes for and 84 votes against) during the examination of the text, which began Thursday, October 20 in the National Assembly. “You have chosen to reject an article which is only the presentation of the accounts of what happened in 2021”, annoyed in the process the Minister of Public Accounts Gabriel Attal, accusing the opposition of “stay in this posture of absolute blocking”.

Social benefits will no longer be paid into non-European accounts in 2024. The Minister of Public Accounts, Gabriel Attal, announced on Thursday that non-pension benefits could no longer be paid from 2024 into non-European bank accounts, for the purpose of combating fraud. “The question of fraud in social benefits which are paid to people who do not reside in our territory regularly feeds a certain number of studies, articles, and rightly scandalizes our fellow citizens”, he launched before the National Assembly. This will apply in particular to the solidarity allowance for the elderly (Aspa), family benefits, the RSA or the supplementary disability allowance.

Today News Post - September 25, 2022 0
From Adele to Queen Latifa and Chaka Khan! If you want to be comfortable in your own skin, shedding a few pounds can definitely help...