It is a dam of a hydroelectric power station located in the Kherson region, in southern Ukraine, and under the control of Moscow forces. 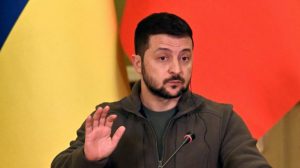 region, in southern Ukraine, and under the control of Moscow forces. “According to our information, the aggregates and the dam of the Kakhovka hydroelectric power station have been mined by Russian terrorists,” said Volodymyr Zelensky in his daily speech published on social networks.

UK joins EU sanctions against Iran. London announced Thursday to impose new sanctions against Iran targeting three generals and an arms company “responsible for supplying Russia with suicide drones” to bomb Ukraine. “By providing these drones, Iran is actively bellicose, taking advantage of Russia’s heinous attacks on Ukrainian civilians,” the British government said in a statement. The United Kingdom thus joins the member states of the European Union, which adopted Thursday sanctions against three individuals and an entity supplying Russia with Iranian drones “which strike Ukraine”.

Vladimir Putin visited the field. The Russian president on Thursday visited a training camp for Russian soldiers mobilized in the Ryazan region, southeast of Moscow, according to Russian agencies. This is the first time since the announcement of the partial mobilization of hundreds of thousands of reservists on September 21. Russian Defense Minister Sergei Shoigu was also present during this visit.

kyiv worries about the “growing threat” of a Russian offensive from Belarus. Its territory served as a rear base for Russian forces for their invasion of Ukraine in late February. Oleksiy Gromov, an official of the Ukrainian military staff, believes that “this time the offensive could be (launched) west of the Belarusian border to cut off the main supply routes for weapons and military equipment” foreigners arriving via western Ukraine, notably via Poland.

The German Chancellor denounces the “scorched earth tactic” carried out by Russia. This strategy “only strengthens the determination and perseverance of Ukraine and its partners”, declared Olaf Scholz on Thursday. “The terror wrought by Russian bombs and missiles is an act of desperation,” added the German Chancellor, speaking to MPs ahead of the start of an EU summit in Brussels.