Five years ago, Thibaud Cheminant left his life in Paris to organize safaris in South Africa. This animal lover aims to pass on his passion to French visitors. 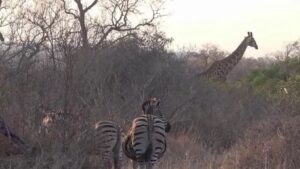 For him, getting ready for a dawn adventure in South Africa has become a ritual. Frenchman Thibaud Cheminant, 36, is a safari guide. Five years ago, he dropped everything in Paris to enroll in a safari guide school, 10,000 kilometers from his home. Since then, he has spent most of his time in a car with tourists, who have come to admire the emblematic animals of the savannah.

“I first came six years ago to volunteer in a reserve in South Africa. It’s very difficult to explain what I felt when I found myself in the presence of all these animals, in this savannah,” he explains. He now owns a travel agency. His clients pay several thousand euros for a tailor-made, 100% safari experience. In the future, he plans to organize other experiences similar in other countries, to transmit to the French his love of wild animals.

Today News Post - November 21, 2022 0
China is facing a major resumption of the Covid-19 epidemic, with nearly 140,000 cases recorded since the beginning of November. The authorities have granted...