In Ukraine, in kyiv, celebrating the New Year was for some an act of resistance, Saturday, December 31. With only one resolution in the heart: the end of the war, in spite of the bombardments. 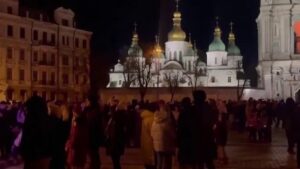 Shortly after midnight, Sunday December 1, a bomb sounded in the sky of kyiv (Ukraine). The first in a scary series. Dozens of suicide drones were launched. On one of them, it was inscribed, in Russian, “Happy New Year”. The weekend left three people dead and 150 injured in the country. Many residents, however, braved the danger and the curfew to celebrate the new year.

“After all this anguish, we bought toys for the children, to relieve their fears”, confides a mother. Most Kievans stayed at home, singing the national anthem from the windows. For one night, many young people met in a sanatorium transformed into a huge party room. They were more than 600 at the time of the count. “2022, fuck you,” shouts a young man. The youth of kyiv escaped, to forget the war.

Today News Post - January 13, 2023 0
In the United States, tornadoes caused extensive damage. Several towns were swept away, including in the Selma, Alabama area, where at least seven people...