Community care services in the Madrid region have been under pressure for several years due to a lack of resources and staff. 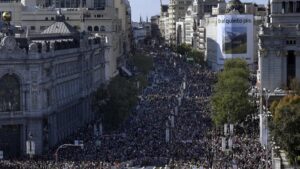 At least 200,000 demonstrators gathered in Madrid on Sunday November 13 to defend the public health system in the Spanish capital region and against a plan to reform the sector, according to an official source. Under the slogan “Madrid comes together to support the public health system against the plan to destroy it”, massive crowds gathered at four points in the capital and marched towards the town hall.

For “a public health system”

“A health care system for all, your health should never depend on your wallet” proclaimed a large green banner as thousands of demonstrators chanted “a public health system!”. The demonstration, organized at the call of local associations and municipalities, targets the health policies of the president of the Madrid region, Isabel Diaz Ayuso, one of the main figures of the Popular Party (PP). This right-wing elected official wants to develop public-private partnerships and restructure the local care system. 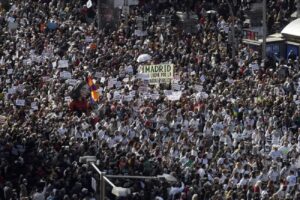 A banner “Madrid defends its public health system. Against the destruction of primary health care” erected during a demonstration organized in the streets of the Spanish capital, November 13, 2022. (OSCAR DEL POZO / AFP)

The demonstration comes ahead of a strike announced for November 21 by 5,000 doctors, including paediatricians, who are protesting against their “work overload”, their “endless” appointment books and “the inadequacy of the time spent with (their) patients”. According to the unions, local care services in the Madrid region have been under pressure for several years, due to a lack of resources and personnel. And according to them, the difficulties have been accentuated by poor regional management.

Today News Post - September 25, 2022 0
Would you like to shed a few kilos? Then you should not only change your eating habits, but also pay attention to what...