Overwhelmed by an active blaze since October 21, the rescue teams will be able to count on military reinforcements. 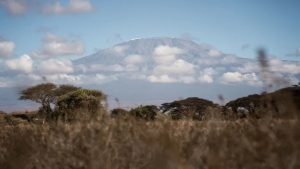 Mount Kilimanjaro, on the border between Tanzania and Kenya, has been the scene of a high altitude fire since October 21, 2022. (FREDRIK LERNERYD / AFP)

Tanzania relies on its soldiers. The country mobilized a military contingent on Tuesday (November 1st) to lend a hand to civilian firefighters and volunteers engaged in the face of a fire on Mount Kilimanjaro, which has been going on since October 21st. No injuries have been reported so far, and tourism has not been affected, the government said.

A fire first broke out near the Karanga camp, around 4,000 meters above sea level, a favored crossing point for mountaineers on their ascent to the continent’s highest peak, nicknamed the “roof of the mountain”. ‘Africa’ with its 5,895 meters of altitude. The origin of the disaster has not yet been officially declared.

Efforts are continuing in #Tanzania to extinguish a fire that has broken out in Mount Kilimanjaro, the highest peak in Africa. The source of the fire is yet to be disclosed. pic.twitter.com/0AYWMnVyIx

As hikers were able to film it, the flames then spread to other sites, taking the approximately 600 people of the fire fighting team by surprise, some of whom were using branches to put it out. The soldiers have “already arrived on the mountain and are ready to put out the fire”, said the Tanzania Defense Forces (TPDF), without specifying the exact number of soldiers dispatched to the spot.

“We will cooperate with other forces and volunteers to ensure the fire is brought under control quickly, before it does significant damage,” the TPDF statement said. Tanzania hopes to be able to count on mild winds, because the gusts of recent days have greatly complicated the task of rescue.

With its snow-capped peak known throughout the world, Kilimanjaro and the area around it are classified as a national park, listed as a UNESCO World Heritage Site. With a total area of over 750 square kilometres, the park is home to remarkable flora and fauna.