The 19/20 takes you, Monday, November 7, to the heart of the Corbieres in the Aude to meet an Italian who produces an authentic buffalo milk mozzarella. A know-how that he brought back from his country. 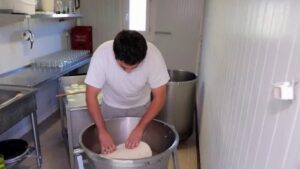 In the Corbieres, it is now possible to observe buffaloes, an animal that produces mozzarella. Eduardo Antonini has completely changed his life. After having been an engineer in Rome, the man has now become a mozzarella producer. Raising buffaloes is not an easy task, however. “It’s an animal that is not easy to raise frankly because still they have a great character and they can be very stubborn”, describes Eduardo Antonini. Buffaloes are on average five times less productive than cows in terms of the amount of milk produced.

The quality of the milk produced by these animals then allows the breeder to curdle it. He then adds boiling water, necessary for the production of mozzarella. Then, the dough obtained is stretched by the producer and then shaped to finally obtain the famous cheese. All this technique, Eduardo Antonini learned it alone. The mozzarella will then be sold in markets or to restaurants who praise the quality of this dish. Eduardo Antonini also produces wine in the Corbieres.

Today News Post - December 3, 2022 0
The 20 Hours of Friday, December 2 goes around the world news in pictures. In summary, the protest that does not weaken in Iran...