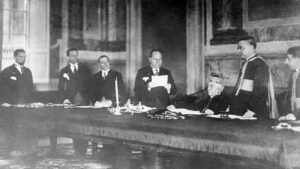 European Micro has an appointment today with books, authors and journalists. We are going to talk about the European Book Prize whose president and founder is France Roque.

How did it all start for this European Book Prize?

France Roque: It all started because we were very close, Jacques Delors and I. I was in charge of communication for a very large magazine and one day, over lunch, I told him why not create the European Book Prize. He told me: “it’s a great idea, but you’ll never get there”. And I tell him shit! In six months. And six months later, it existed. And that was in December 2007.

The prize is still awarded in Brussels at the European Parliament with a jury made up of journalists?

A jury made up of journalists from all the countries of Europe and the sponsorship committee had been set up by Jacques Delors, first with former ministers or the former President of Latvia, etc. And then little by little, it evolved, but it’s still at a very high level. The sponsorship committee and the jury of very very good European journalists.

With always jury presidents, we can say emblematic; this year, it was Tiago Rodrigues, a Portuguese playwright who has just taken over the management of the Festival d’Avignon. This European book prize was awarded on Wednesday 7 December in Brussels. Who won ?

The winner is Antonio Scurati, an Italian, for M. L’homme de la providence, published by Les Arènes, that is to say Mussolini. The journalists, except for one vote, decided that it was between Thomas Mann and Mussolini, and since Tiago Rodriguez had two votes, he passed Mr. ME: France Roque, est ce que le j

Was the jury influenced by the fact that Georgia Meloni was elected President of the Italian Council?

Yes, absolutely. Because it is the return of the nationalist right and therefore he thought it was perfectly in the news.

What are the other works that have been presented in this jury?

There was a work by an Irishman, Denis McShane, which was called The Magician and which was the story of Thomas Mann.

This European Book Prize is for authors from all over the European Union. How do European publishers react when you call them and how do you find the authors?

Reading the newspapers every day…

The Financial Times has a special “the book”, which I watch very carefully, because it talks about all books, practically European, also American of course, but also European. I mark all the books which seem to me a little close to the subject which is to talk about Europe.

We always have to talk about Europe, right?

Whether it’s a detective story, a cookbook, philosophy or something else, we have to talk about Europe. We receive about 38, 40 books a year, in English, German, Italian, Spanish, French.

Today News Post - December 3, 2022 0
Three migrants from Lagos (Nigeria) were rescued on Monday November 28 in the port of Las Palmas, in the Canary Islands. They spent eleven...