Seriously heckled by England, Saturday in the quarter-finals, the players and Didier Deschamps highlighted the state of mind of the Blues to explain their qualification in the last four of the World Cup. 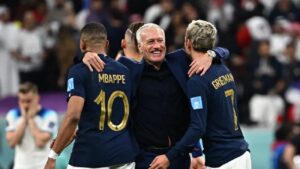 Didier Deschamps embraces Kylian Mbappe and Antoine Griezmann after the qualification of the French team in the semi-finals of the 2022 World Cup following their victory against England (2-1) at the Al-Bayt Stadium, on 10 December (AFP)

France trembled, France didn’t really dominate… but France got away with it. Against England, Saturday December 10 in the quarter-finals of the 2022 World Cup, the defending champions did not show their most flamboyant face, like a Kylian Mbappe padlocked by the rearguard of the Three Lions. But they have proven that talent is not the only weapon at their disposal. Solid until the end, and despite adversity of a different caliber than what they had faced so far in Qatar, this team proved that they still had a solid head, ready to take the blows, without wavering.

There would have been enough, however, when England came back up to par thanks to Harry Kane in the second half, or when the Tottenham striker appeared a second time against Hugo Lloris before sending his penalty three good meters above the tricolor goal. Because our neighbors across the Channel gave a lot of trouble to the Blues who spent the evening more taking the blows than giving them. “It’s fabulous because it was a big match, we met a very good England team, very athletic, Didier Deschamps welcomed the microphone of TF1. But we responded once again. It’s magnificent for players to once again reach the last four of a World Cup.”

So failing to make their offensive individualities speak, they drew on other virtues to hold an advantage which sometimes seemed very slim. “Tonight, the quality is there, with a mind and a state of mind,” Didier Deschamps told TF1. “But we gave ammunition with the two penalties. Afterwards, it was with heart and guts that we held this goal in advance.” “It is played by little, sometimes by a second, by a pass a little behind, a little in front, with such intensity…”, he continued in a press conference.

I wouldn’t say we doubted, but of course we suffered, but there was always a foot, a head, Hugo’s hand to get us out of there.

If the French players are lucid about their mental qualities, they are just as clear about the XXL performance of their last rampart. Author of six stops, Hugo Lloris kept the French team afloat against the English waves from start to finish. “The more we advance in the tournament, the more difficult it becomes, the more we have to raise the level. Today, I had more work than in previous matches, conceded the French goalkeeper to TF1. You always have to be focused and ready for the team. Beyond all that, it’s the collective effort that has paid off. When you see the united group, the staff, that’s why we play football.”

From now on, the most capped player in the history of the France team and his teammates will be able to project themselves on a new major challenge: Morocco in the semi-finals, and their style of play so different from that offered by the England this Saturday. No way to see it as a slight boost, against a team that no one expected so far in the competition. “For the moment, we are in half, we will not see each other at the end”, immediately tempers Didier Deschamps in a press conference. And before that, “we have to take advantage, we want to suspend time because a semi-final is not nothing” smiles the coach of the Blues to TF1. “We will savor and then we will have to switch to Wednesday.”