According to Dmitry Rogozin, the shrapnel that injured his back was fired from a French Caesar cannon supplied to kyiv. 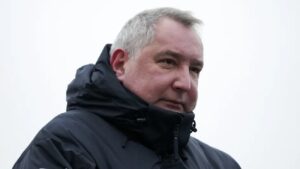 The head of the Russian space agency, Dmitry Rogozin, on December 8, 2021 at the Baikonur cosmodrome, in Russia. (AFP)

France will receive a strange package. The former head of the Russian space agency Roscosmos, Dmitry Rogozin, announced on Wednesday January 4 that he had sent President Emmanuel Macron the piece of shrapnel (a shell containing bullets) which injured him in Ukraine. The machine was fired, according to him, from a French Caesar cannon supplied to kyiv.

Dmitry Rogozin, who currently heads a group of military advisers providing assistance to separatist forces in Ukraine, was injured in the back in December in a Ukrainian strike on a hotel in Donetsk, in Russian-controlled eastern Ukraine. , which caused several deaths and injuries. He had assured that the incident had occurred at the time of a “work meeting” in the restaurant of the hotel. The Russian public television channel Rossia 24 had for its part claimed that the ex-boss of Roscosmos was celebrating his 59th birthday there, with guests and musicians.

“No one will escape responsibility for war crimes”

The former head of the space agency explained after the strike that he had been operated on at the hospital because a piece of shell had lodged above his right shoulder blade. Dmitry Rogozin, an ardent supporter of the Russian offensive in Ukraine, explained that he wrote to the French ambassador in Moscow, Pierre Levy. “In this envelope, together with my letter, you will see a fragment of a shell from a French 155 mm Caesar artillery piece,” he said in this open letter posted on Telegram.

“It punctured my right shoulder and lodged in the fifth cervical vertebra, just a millimeter apart it could have killed me or disabled me.”

Contacted by AFP, the French Embassy in Moscow did not wish to comment immediately. The shelling that injured Dmitry Rogozin also killed two of his friends, said the latter, adding: “All our victims are on your conscience.” “I ask you to hand over the fragment removed from my spine by the surgeons to French President Emmanuel Macron,” the Russian official said. “And tell him that no one will escape responsibility for war crimes,” he added.